Right from the start I'll spoil all the fun for you and say that “Enfeebling The Throne” by Turkish black death outfit Raven Woods is a kick ass record! Now, that I got your attention I'll spend the res of the review explaining what's so great about this record that made me put it on repeat over and over again.

There are many bands you can draw comparisons with for this Turkish band that dates its history back to 1998. The present record is only their second full length album but never mind the gap because the material delivered is so intense and dynamic that you just can't help but listen. Now, let's start with comparisons – the only way you can describe a band your friends have never heard. As mentioned in the beginning, Raven Woods play death black metal and it's quite to say whether it's blackened death or deathened black. Just imagine a mix between Behemoth and Melechesh and you'll get a general idea of what the band sounds like. But it's just more than a simple mix of those two bands!

The musical foundation for Raven Woods is composed of oriental melodies within the Arabic scale, which makes it a bit resemblant to Melechesh. Yet, the overall intensity and tightness of the material leans more towards the Behemoth-type of death metal with precise execution from all the musicians. What really surprised me is how well the distorted bass can be heard, which is a rarity on most extreme records these days. And it's a pity, because the bass on “Enfeebling The Throne” definitely adds up to the intensity and power of the music.

Still, what made this record really special for me is the presence of amazing acoustic parts, which blend perfectly with the overall atmosphere and provide the necessary contrast to make the heavy parts even heavier. It's these acoustic parts that shows the incredible level of musicianship in Raven Woods, because if you can play this sort of mellow and calm stuff so perfectly then you can play anything! It reminded me of Karl Sanders from Nile and his solo works, although the Turks show how genuine oriental music should be played the right way. These acoustic intermissions let the listener relax a bit before a new turn of brutal intensity and that's a very wise compositional move if you ask me. Because it really grabs your attention but doesn't demand full focus on the record.

To sum up my opinion, I can definitely recommend this album to anyone who wants something really good and intense in their ears. And you don't have to be a death black metal fan to enjoy Raven Woods. I'm not, but I really enjoyed the record because it deserves the attention of all metalheads who love well played and interesting music. So make sure to enjoy “Enfeebling The Throne” if you get the chance to. 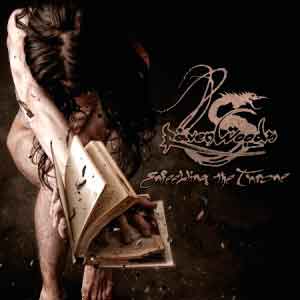