Ravencult's second album, 'Morbid Blood,' is just as groovy and blackened as their first. Still focusing on a 'hell on wheels' approach, many of the tracks are chock full of tremolo pickings at high speeds with gutteral snarls of venom and a mix of groove metal and even punk rock elements, along the lines of bands like mid era Darkthrone and Khold. Tracks like "Sacrelige Of Death" and "Winds Of Damnation" are fast paced and very energetic tracks that really embody the spirit of blasphemous evil without being too underproduced to get that raw, cult feeling. Others like "Hail Revenge" and "The Gates Of Bloodshed" are bit more even and slow paced, adding a sinister element of darkness and almost brooding procession of groove. The vocals seem a bit slowed down and sound even more hateful and brutal compared to when they are in competition with the guitars at high, relentless speeds.

The only downside of the album is that a lot of the tracks tend to sound the same, which was also the issue with their previous album. True, most black metal fans will find this enjoyable because it is pretty decent black metal without being too esoteric, too symphonic, or too experimental to really 'turn away' any particular fan base. This is raw, but not too raw, and certainly evil enough without being too typical. The catchy elements of the riffs, on both the faster and slow tracks, add a lot more for the music despite its minimal aspect; usually for focus is all on the guitars because they are the loudest instrument compared to the vocals. The album doesn't really bring anything new to the genre, but it doesn't shame it either. Mostly fans should consider this a strong follow up for Ravencult that kind of leaves them treading water- they haven't really progressed any further with their music- but they also haven't tanked or drowned by creating a disaster yet. There is still lots of room to expand and continue their black metal evolution while retaining an original fanbase. 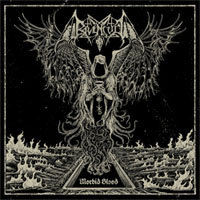