Switzerland's Requiem unleash their fifth death metal masterpiece, and from the looks of it they haven't lost their touch. 'Within Darkened Disorder' carries a furious weight similar to the likes of Severe Torture or Decapitated, creating heavy music that is also varied at parts, either through guitar melodies or varied drum patterns so it doesn't feel too one sided. The vocals are furious, raging, and sound perfectly suited for the musical style. Tracks like "Omnivore" and "Symbol Of Nine" just take off from the start and hit with full force- especially when it comes to the sound of the drums. The mix of pedal work and the cymbals is great in complementing the chugging riffs and growls of the vocalist while pausing every once in a while for doses of solos to come along (cohesively) before starting up again. Requiem may not be one of those 'guitar solo' groups, but the way they orchestrate everything together is pretty impressive, partially due to the great production work.

Other tracks like "Solemn Sacrifice" have a bit more rhythm and melody involved than the other tracks. There are a lot more pauses between riffs and the drumming, along with longer chord sections and almost a mask of doomish atmosphere that at the same time doesn't take away from the brutality of the music overall. The pedal drums are a bit more in overtime than some might like here, but the rest of the music makes up for that shortfall. "Purified In Flames" leans more towards a marching rhythm of the guitars; everything just seems a bit quieter, which allows the vocals to shine and storm through the music, much like a Vomitory track would. Overall, the band holds to its two year gap in between releases and puts on another steady album for fans to hear. Newcomers to the band may feel like it sounds like about five other bands they've already heard, but will still appreciate it for the hard and heavy attitude of the death metal while remaining musically virtuous. Older fans already know what to expect... and they shall not be disappointed at all. 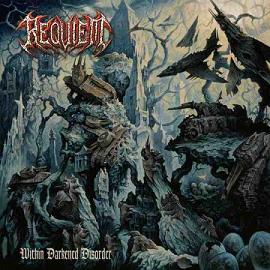