Ruttenskalle is the solo old school death metal project of Paulo Soares from Portugal. The sound is raw, grim, and evil, hailing back to the late 90s style of Dismember and Grave. The music is pretty basic with slow to mid paced riffs, a lot of distortion, vocals that switch between cavernous growls and mid range snarls with a healthy dose of drumming and atmospheric keyboards to add a little bit of doom elements. The attitude of the album is dark and murderous with song titles that would make Cannibal Corpse proud, but with a little bit of humor sprinkled in to let listeners know the artist is having fun. Tracks like ‘Carnage’ and ‘Buried’ are pretty standard death metal fare with rather melodic solos and definitely have the Grave sound to them. The distortion from the guitars definitely gives it that old school sound but gets in the way of any technical prowess, but the focus on Ruttenskalle’s skill is definitely in the guitar solos. No matter how much a lot of the tracks may sound the same, the solos are always fresh and gripping.

Overall, the debut effort "Skin ‘em Alive" doesn’t bring anything new for those who are well versed in old school death metal, but it doesn’t make a mockery of it or sound so cliché that listeners will probably pass on it after the first three tracks. Soares does a good job at paying homage to the old school sound and fans of anywhere from older Paradise Lost to Entombed will probably find this album very enjoyable. Definitely a dark, homicidal album full of tracks meant to beat the brain with while headbanging versus more thoughtful or provoking tracks meant to stir the mind, but still a fun album to enjoy for those who dig the nostalgic brutality of the 90s from the likes of Cannibal Corpse or Mortician. 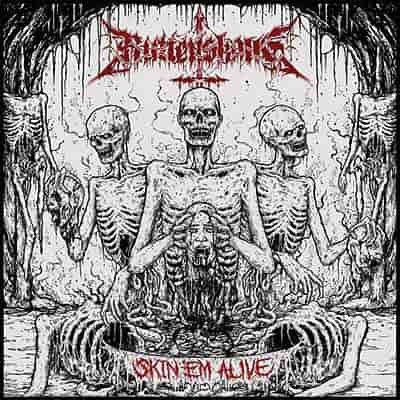