Sacrilegious Impalement released their debut full length entitled "Cultus Nex" in 2009. This Finnish Black Metal squad features members of Evil Angel. This CD is a pounding mixture between Darkthrone, Dark Funeral and Marduk; while also adding in their own unique sounds into the Finnish blitzkreig.

"Cultus Nex" starts off with an instrumental intro which is both eerie and mezmerizing. It is a traditional Doom riff which progresses into dissonant chords; it successfully lays the groundwork for the bombardment of misanthropy which ensues in the following tracks. This whole album is a monumental dirge for all of mankind!

The full length debut differs from the two previous EPs in the sense that it has more production and the drums are triggered to hell and back; which in turn, makes the album more accessible to those who are unaccustomed to the typical Black Metal production. Despite all of this, "Cultus Nex" is still able to rage just as hard with the typical underground albums. 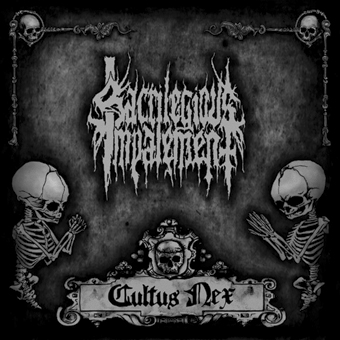