Sadus - Out For Blood

After 7 years of silence Sadus is back and now releasing their new album on Mascot Records from Holland. Ever noticed that all the albums are released by Dutch labels?. Well, Sadus is known as the band of Steve DiGiorgio on bass but Sadus is more. Sadus stands for effective and technical thrash metal. Songs that are hammering fast or in midtempo but they still thrash. Caracteristic vocals, fab basslicks, aggressive guitars and the snapping drums make Sadus to the top of thrash metal. Never got the stardom before but I hope that they will get now. This is pure and classic thrash metal. Oh yeah, Chuck Billy is also doing lines on "Crazy". 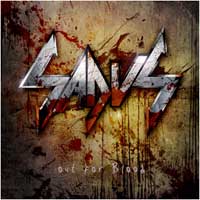