Seita may call themselves death metal, but that's a little misleading. From the sound of their debut EP, "Imprint Forever", the sound is a much more aggressive metalcore thrash type, like Pantera on steroids. The riffs are catchy and relentless, as is the drumming. Vocals are bellowed in that Pantera-esque howl minus the melodic singing. A lot of the music is structured around trying to be as fast as possible, but there's plenty of thrash riffs to make things interesting in how the chord progressions change. "Speaking With Ghosts" is the most prominent example of this, especially near the end how the chords shift in that melodic thrash sequence akin to a band like Dew Scented. Not a bad thing.

"Imprint Forever" opens up with a brief spoken word sampling involving a machine gun going off. Then the title track opens and the music begins. At first one may understand due to the riffs and drum patterns why Seita would be considered death metal, but once the vocals hit it is very clear that the music is far from it. There's certain pauses in the music, on top of the screamed vocals, that hint more at thrash or groovy metalcore than death metal. That being said, the song is still as brutal as any death metal band could perform. Other tracks like "Dethrone the King" have a thicker, more dirty thrash sound that sounds just like Pantera, but it isn't as majestic as anything the now defunct legends have put out. However, providing Seitia continues in their groove thrashcore style, they very well just might put out something that's on par, if not better due to more modern times and production.

Tracks like "Drowning in Blood" hint at more metalcore influences such as Lamb of God. The quick tempo riffs and 'tapping' drum style certainly mirrors this, and if the vocals of Seita were just a few octaves lower, one could almost say Lamb of God had a clone running around out there. Whatever the case, it is a good influence and sound for Seitia to follow as it fits in with their style. "Fire and Pride" is about the only bland track on the album, offering an interesting sludgy riff that repeats through the song but the whole 'sludge metal' atmosphere doesn't sit well with the ferocity of the rest of the music. Seitia should stick to the thrashcore. There is a really nice solo near the end, however.

For a debuting EP, "Imprint Forever" is extremely promising. Hopefully the band's debut will live up to the sound and maybe surpass it. Everything is crisp and well produced while still sounding heavy; the album doesn't sound like it was produced in someone's garage. Considering it was self released, perhaps it was released in a garage. If so, it must be one hell of a garage sound studio. 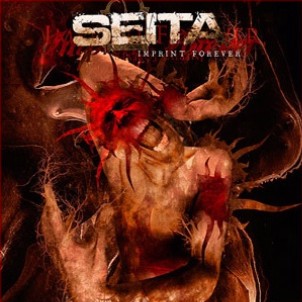