It is hard to describe what (Sic) Monic, the five piece band from Arizona, have creates with their latest album, Sonambulist. It's hardcore, it's deathcore, it's rock, it's prog, it's... good. A varied album, Sonambulist will entertain fans for some time. "To The Fiendz" opens things up with full melodic brutality, showing off prog string pickings, hardcore chug riffs, growled vocals and clean singing. Obviously there is a lot to take in here. Nothing sounds poorly produced or done; the harsh vocals are either deep and clear or high pitched while the cleaner vocals hold a tone that's a cross between alternative rockers Mudvayne and Tool. "Till The Morning" shows off more of the clean vocals as well as some more melodic sections, while staying heavy and loud in the hardcore/ deathcore riff vein. But, there's certainly a lot of prog metal influence here, especially in the middle. Other tracks like "Sonambulist" and "Of Blood And Grace" are more jazz fusion deathcore; the drums are insane, the screaming top notch, and there's so many technical riff changes that it will make mathcore fans smile and a lot of people used to 'normal' metal have a headache. But, again, it's very interesting to have this sort of variation on the album. Another interesting track to note is "How Far Down..." where there's a classical structure to the guitars in the sense they can sound like violins at time and the vocals actually rap for a bit.

Not all of Sonambulist is metal and heavy. There's a lot of slower, rock ballads here as well. "Requiem" sports a haunting guitar melody while the vocals sing cleanly with a bit of anguish to harshen the edge. "Paradiseum" is even slower and softer, offering an acoustic piece that Opeth would end of trying out. The clean vocals really show off their talent here. While some metal fans may be turned off by the epic, softer feeling of the song, they shouldn't worry since there's only two, and when "Paradiseum" ends one of the heavier deathcore tracks comes on, "Acidic Epiphanies," with plenty of evil groove and growling to remove any sense of peace. Of course, like all the others, the song isn't without its quirks as suddenly some whispery harsh vocals come on halfway through the song and the clean vocals sing in a weird, bizzare tone to follow the prog-jazz feeling of the guitar. It's a good way to close the album, if fans have the regular version.

For those that apparently got a second version of the album (the one that was released on the the label Aural Music), there's four bonus tracks to contend with. Most are in the vein of the album in being heavy, prog deathcore, but there's a few oddballs to keep things entertaining. "Seven Inches Deep" starts off sounding like some Irish punk melody from a band like Dropkick Murphys before the deathcore part comes in. It is an odd sound for the band, but works, since the entire band is odd, in a progressive good sense. Then there's the cover track of "The Devil Went To Georgia" which turns this country-rock tune into something crazy; there's even a fiddle involved to keep things original. But the addition of electric guitars and the growled vocals add a new layer of brutality that is enjoyable. (Sic) Monic definitely have talent, and anyone who appreciates experimental rock or metal like Tool, Between the Buried and Me, or Klone will find this just as exciting and mind bending. 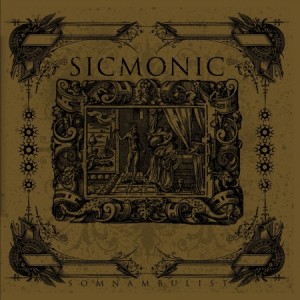