Sick Drummer Magazine is an organization that glorifies the extreme drummers of the music world, similar to how GuitarWorld does the same for the guitarists. So listeners should expect anything that comes from Sick Drummer to have an extreme focus on drums. Unfortunately, that is about all their second chapter in the Brutal Beatings series has to offer. It is a compiliation of death metal, deathcore, and technical death metal. Sadly, not much music variation. Everything tries to be played at breakneck speeds with the drummer sounding like he would break his arms from the whiplash of hitting the kit too hard. The guitars are either right there with the breakneck speeds and little melody or trying to have so many technical changes the music sounds schizophrenic. Vocals are either growled or screeched; let it be warned the screeching is usually VERY annoying, especially on the Vaulting track.

There are some recogizable names in the compiliation such as Impious, Graves of Valor, Last House On The Left, and Deadspeak, but they all sound the same or worse versions of the better songs. It would have been better to see a band like Dying Fetus in the mix because their drumming style is unique and a welcome change from all the other obliterating poundings that the rest of the bands chosen do. There is a welcome change on "The Story" by The Binary Code where there is a melodic interlude and some clean vocals on top of the skilled drumming. There's also some hardcore influence on the final track where the vocals are welcome reprieve, as well as the slow, anthem paced chugging guitars. This is the kind of mixing up that Sick Drummer Magazine should have had, not just the brutal death metal bands.

While it is understandable that Sick Drummer Magazine is trying to show off skilled drummers with their choice selections, they sadly paint themselves into a corner where they explore only a very small portion of metal genre world. Who is to say that black metal doesn't have some really good drummers? Frost of 1349 can sure demonstrate his skills on the kit. How about some grindcore? Power metal? Progressive metal? Doom metal? Not all drumming has to fast and relentless to be good. Hopefully Sick Drummer Magazine will be kind enough to deliver a larger variation of the music world with chapter 3 in their line of showing the world just how brutal the drums can get from all over the metal genre. 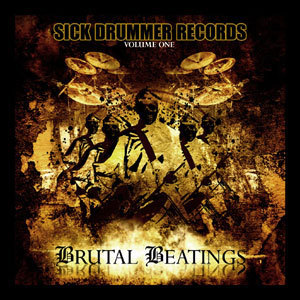