After the preview of their demo, Italy's Signs Preyer decided to go forth with a finished project that is a collection of smooth, Groove Metal pieces that touches more on Rock than Metal. Usually when one things of Groove Metal these days they consider Skinlab, Devildriver or Lamb Of God. Signs Preyer bring things back to the 'original meaning' touching upon a slower, Southern Rock style that is similar to a mix of Throwdown, Pantera, and Alice In Chains. The music is certainly full of hard riffs to headbang too, but the vocals are what really may throw the curveball. On the opening "Anger" they contrast the title by not performing the typically expected Hatebreed or Pantera inspired snarl, but rather almost a soft crooning tone that would fit more with Alice In Chains or even Tool. On other tracks like "Just To Kill You" there is a bit of a rougher tone that would suit more along the likes of Down, but overall the tone is still highly Rock. On the downside- and this can happen with a lot of Groove Metal albums- the band tends to get focused on only a few riffs and a steady pace that can get a bit repetitive over and over until a solo charges in and breaks things up, but still the monotony can tend to flow a bit too much.

Still, Signs Preyer tries to mix things up as much as possible in between tracks. "Killer Instinct" has a more southern vibe to it with a touch of Grunge whereas "Bitch Witch" simply chugs along with a bit of distortion and a few sex samples, although they are a bit distasteful. "Dark Soul" is one of the 'slower' tracks, but by slower this just means more downtuned guitar and a few more acoustic moments performed at a Sludge Metal pace. On the plus side the guitar solo seems much louder and enjoyable to focus on. "Hell" gives a Thrash attack with its faster pace that contrasts with the repetitive, yet choir like chorus line of "Hell" which brings a unique flavor to the music. Finally the closing "Signs Preyer" includes a special Easter egg where the band performs their music at an extremely slow pace, almost like a record being heard on the 'slow' function. The heavy distortion warps the vocals especially and may throw some listeners off but it is a great experimental moment for the band to indulge listeners towards. Overall, this collection hard southern Rock and Groove Metal is a strong effort for a debut album and even with its slight faults can be rather enjoyed by almost anyone who likes music with a bit of a raw edge and rhythm. 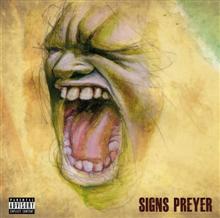