Normally I don’t like SPLIT-Singles or something like this. Because they are usually made ​​carelessly. But sometimes there are exceptions. Exeptions like the Split between SMASHING DUMPLINGS and SPERMBLOODSHIT. This is made with mor effort but first things first. 6 songs within 11 minutes. Both bands have delivered solid material. This means, great punchy recordings. Well mixed and mastered. It’s a little bit sad, that obviously nobody mastered the whole Split because the recording from the first band Spermbloodshit are much more louder than from the second band Smashing Dumplings. And here you can see that this split ist made a little bit carelessly too. But nevertheless, the Front Cover and the Inlay too is cool (made by Mattia Sferrella ) and so I can excuse the variance of the volumes. About the bands. Smashing Dumplings are four czech guys and everybody knows that Czech has a real big and great metal szene and this is the reason why I’m not surprised about the class of the band. Realy cool grind with a tendence to gore I think in a perfect mixure. Some nice Ideas at the beginnings of the songs and so it’s a little bit pity that these ideas are not continued in the songs. Especially because it were possible. What I notice, after hearing the songs from Smashing Dumplings I don’t remember the songs and I have no interest to hear the songs again. This leaves a rather mediocre impression. But still, the three songs on this split are OK.

So on closer viewing disillusionment occurs. Then let us listen to the next band. Spermbloodshit. I guess a pure goreband regarding to the bandname. But….no goal! This three songs are totally pure italy-grindcore! After a first, much too long and boring intro, is hiding great grindcore. Powerful songs, songs to disengaging your mind and to dance around the pit! But only three songs and this is the reason why I don’t like splits-singles, only singles or compilations. If there is a cool band you can’t hear more. Fuck! This three songs are definitely not enough. Therefore, quickly looked for more! Conclusion. This split confirmed again why I don’t like splits but this split makes what it should. You should want more. Not more from Smashing Dumplings but more from Spermbloodshit. Not that I'm misunderstood. Smashing Dumplings have done great work but it’s nothing regarding to Spermbloodshit.

Because Spermbloodshit is part of this split: 4 Stars 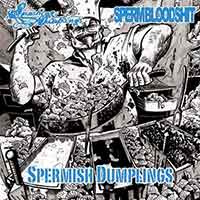