Three guys from Belarus (some little country in Eastern Europe) are playing extreme goregrind inspired by Utopie and Gut. It is going from very fast to groovy mid tempo. Vocals are distorted and brutal. The songs are rather short and before you know the blast is over. But it is an album that you easily play again as it is gore and it is catchy, it is fast and it is stamping. Surprisingly a nice album and with all those sick lyrics for adults there is also thought about little kids as Schnappi is coming by at the end of track 7. 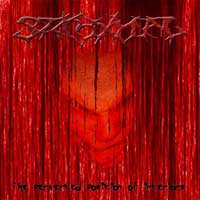