Stormwrath's debut album is a hard hitting thrash machine that will bring back memories of the 80s with bands like Kreator and Sodom. 'Swords Of Armageddon' starts out typical but ends up closing on a very strong, unique note, so those who may feel the album could get a tad boring due to its tendency to stay in 'one gear' will be happy to know the entire album isn't all just thrash based riffs that tend to repeat themselves over and over along with the rough, almost death metal like vocals. That being said, this album isn't really boring at all; just somewhat repetitive. "Ascend To Hell" is a great thrash track with the spitfire vocal assault, a clear, buzzing bass among the chugging riffs, and the group chorus assault that really drives the point home. Other tracks like the title track seem to include a bit more groove and melody- especially during the beginning- than the others so that breaks away from some of the monotony of the thrash metal bits that are like "Revenge" and "Throw The Hammer" (both sound very similar).

"Beyond Trinity" has more of a prominent drum role in the music compared to the guitars, which are usually the top feature in thrash metal. They crush, pause, jump, and provide almost a militant march that really provides some more complexity to the music rather than the usual simple style that has populated many of the other tracks. It is the last track, "Ride The Scythe," that really shows off the band's integrity. Slowing things down for almost a doom metal pace with a simple, yet effective chug, the song crawls its way along with what seems to be to backing keyboards that add a haunting, twisted atmosphere that really sets the tone for an album titled such as 'Swords Of Armageddon.' The vocals also take a new turn with their low, spoken word format which is ten times more effective at grabbing attention than the constant shouting hear before. The song kind of detracts from the whole thrash expectation of the album, but at the same, provides a unique side of Stormwrath that hasn't been seen before. It is very epic, and rounds out 'Swords Of Armageddon' very nicely for a strong debut album. 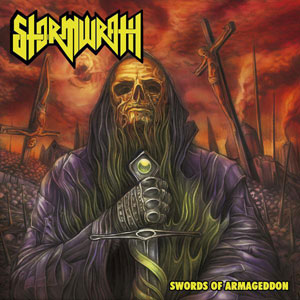