Streams Of Blood was formed by Thymos (Ex-Darkened Nocturne Slaughtercult, Ex-Sargwart, and Ex-Engraved) and Tavor (Ex-Engraved) in 2009. During the suicidal summer 2009 the band recorded the first Mini-CD “Antilife”. The first full length “The Descend To The Source Of Disorder” released in September 2011. In February 2013 the new Album "Ultimate Destination" was released. The central theme of this record is the escape from our Inside. The fight against Life and Death. The Songs are more brutal and faster than the old stuff.

With a cover depicting the Ultimate Destination (and we all know where that is don’t we folks!) and just as gnarly as the music contained within in it Streams of Blood give us a very promising start to what will hopefully be an even more promising listen with this ten track album.

Intro
From its opening breath a bell tolls to the sound of a dripping tap and some ambient riffs – quite a sinister beginning and quite an anthemic track even though it’s just a filler.

Road To Ruin
Pelting rhythms hound the senses with this blast furnace of black metal rampaging. Scathing black vocal carries the track through its paces of sheer imagination and holds a solid uncompromising beat that ignites into an explosion of tempting delicious rhythmic sway.

Temple Of Blood
This track takes you on a blood thirsty rampage of malevolence as it eats furiously into the aural cavities, with its bludgeoning beats and caustic rhythms. It holds tempting melodic touches that compliments the rabidly intense guttural growls and so far a favourite.

I Have The Might
Antagonistic and unyielding this track is another fiery heartfelt composition that leaves the listener bewildered with caustic rhythms and forceful riffage. Stunningly intense just as Black Metal predicts but this has attitude.

Bringer Of Light
Brewing up a storm of compulsive rhythmic beats this fast paced monster literally creates images of evil intent as it reaches its peak of imposing horrors that are awash with bristling brutality.

Inner Tyrant
A good blasting beat kick starts this track and ignites a good ferocious rhythm. Vocally raw and bruising – this band know just how to poke the emotions with a big stick that will beat the living crap out of anyone who does not think this is a superb track. If you like wind-milling you can do it to this track with ease – definitely another favourite.

Beast Reflect
Another rhythmic anthem from Streams of Blood although it breaks back into its black metal comfort zone with ease and produces an expanse of raw black vocal to accompany the surrounding pressurised beats that in turn spark a journey into the (Known!)

The Master
Highly charged and provocative with perfidious rhythms of arrogance. It leaves one feeling violated and unclean as it rips through the aural with sheer hatred and weaves its web of dark deceit.

Von Der Realität In Das Ewige Licht – The Reality Of The Eternal Light
Stretching its darkened brittle bones to the skies this track goes on a vicious rampage, saturated in blast beats and contagious rhythms all within its comfort zone once again.

New World Order
A slow and plodding beginning it works up to demonic saturation of vehemence. A totally annihilative track that is however embracing with its scorched vocal secretion.

This album is without a doubt brutal, extreme and powerful with added touches of abrasive vocal and although it isn’t anything completely innovative still manages to ignite the senses and entices one to investigate all the tracks contained within it more thoroughly with a few extra repeat replays! My personal favourites are “Temple of Blood and “Inner Tyrant” the rhythms are infectious and dark with brooding qualities.  It is too hard to imagine that this album would not add to the bands growing fan base as it is packed with a few good surprises that will chew on the aural – so go check them out, and pay special attention to “Inner Tyrant!

My one slight gripe is that the vocals although superbly scathing and guttural do seem slightly muffled and not boldly step up to the forefront of the tracks which is a shame otherwise a solid album. 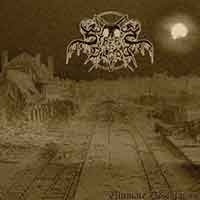