There are so many great Brazilian bands. The Crust punk band Subterror are not among them. Active since 2009, they have now produced their fourth output. The title: "Antropomortum". Subterror, Luan (bass/vocals), Harry (guitar) and Samuel (drums), have spend a lot of money for “Antropomortum”. Recorded in July 2014 in the C1 Audio Studio (Brasília/Brazil). Engineered by Claudio Moraes and in September/December 2014 mastered by Jera Cravo in Vertex C Studio (Montreal/Canada). The cover art is by Hal Rotter of Rotting Graphics (USA). Released in July 2015 on Black Hole Productions.

Finally, the co-operation with all these professional people was worthwhile. The disc is absolutely round and succeeded. Starting with the cover artwork, which is designed typically for crustcore in black/white captures the mood of the entire disc perfectly in one picture. You may listen to 9 gloomy and fast old school crust-Songs in about 22 minutes. The sound is crusty and powerful as it should be for crustcore. All instruments, including the vocals are perfectly matched. The volume - the whole sound - is absolutely harmoniously. You can hear every instrument at all times. However, the volume of the songs themselves are not always optimally balanced. For example, sometimes a song starts a lot quieter than the previous song ended. But all in all, good job! The professionals did their job.

Musically, however, you’ll find no surprises on this record. The songs are made without great ideas and you’d wait forever for an initial spark that strikes you. The songs are more like a complete porridge without differences between them. Sometimes it seems that the instruments are a little bit clumsy and in these moments you may hear that the instruments are not always really well controlled. In my opinion the best song is 'Distopia', because this one is the only one with some autonomy; where at some point an idea germs. Conclusion, "Antropomortum" is a well produced and nice-to-listen-to disc, but nothing more than that. There is no major idea behind it. It is reproducing old ideas. For diehard crustfans, the purchase may be worth it. A conciliatory final word. It seems that the band has more potential for future releases and I hope that they will have more spirit and heart for their next release. 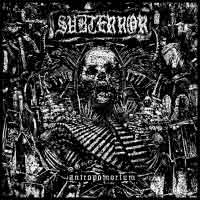