Supreme Pain is a new project of members of Sinister, Scaffold and other European death/grind bands and this is their first full-length album. Their attempt is to combine early 90s death metal with today’s furious blastbeating brutality. In my opinion they do it pretty well, but to be honest they do not sound like something you haven’t listened to before; have you listened to the new albums of Sinister, Entombed or Dismember, you can see that Supreme Pain sound very similar. Anyway, being totally original is not really the point here, because the death metal scene today is so big and so overcrowded, I don’t think anyone expects to listen to something he hasn’t listened to already. What we’re looking is decent, honest, stinky fucking brutality here and Supreme Pain is a band that offers this kind of ear-torture widely: full-speed blastbeats, furious riffing and a well-known throat gives you what you want; BRUTAL DEATH METAL…...enjoy! 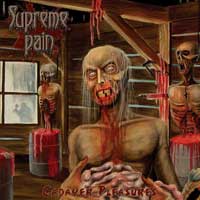