Svneatr are a Canadian black metal group that try to avoid the traditional gimmicks of the genre and go for a more straightforward, yet atmospheric approach. On their second album “Chinook” the band continues that kind of folk black metal theme approach but don’t quite go the folk black metal route by adding in a lot of acoustic instruments or keyboards for a lush background. The sound is actually quite minimalistic and raw, almost like a thrash black metal approach with the opening track ‘The Wind Stirs.’ The raw guitar tones and thick drums definitely have that kvlt feel to it but it isn’t so lo fi and distorted things can’t be heard. The vocals have that right snarling pitch to it, so it al sounds like a more thrashy version of Immortal. Other tracks like ‘The Consequence Of Fear’ are slower, more of that churning slow burn black metal type such as along the lines of slower Watain or Marduk. The fastest part here is probably the drums. For those looking for a good balance of black metal and what sounds like thrash, ‘Mourning Sun’ has some excellent solos that are heavy and also atmospheric with their raw, yet simple tones.

The band has a few more tricks up their sleeve though to keep listeners interested. While the first few tracks of the album sound like cleaner, minimalistic black metal, ‘Lavender’ is where the boundaries start to get pushed compared to the first album. Svneatr aim for more epic territory with this track and even include clean vocals and a more groove laden chug that is very catchy, but also sheds away a lot of the normal black metal elements too, making this track more prog laden, upbeat, and overall a bit of a game changer for what the band has done so far. The guitar solos have even more of an echo to it, and if they ended up including piano then suddenly the music might feel a lot more like Ghostbath vs. Svneatr. The band continues their rather progressive elements with ‘Veins Of The Earth,’ but only in the beginning with the more acoustic, peaceful sounding tones before building up and exploding into the heavier, thrashier black metal that was present on the first few tracks. The longest track on the album, the band has to do more here to keep listeners interested, and they do their best by presenting one of the best bridges on the album with the guitar solo their create. While not as atmospheric as some might like, the music here is certainly one of the better presentations of the album.

Finally there is ‘Erasure’ which kind of tries to throw everything all together by keeping to the black metal roots with thrashy elements, and it sounds awesome. But, the band opens with a rather melodic doomy intro and mid section that could have been capitalized on for a greater effect if they had slower moments and tones like this through the album as a whole, almost drawing on a Swallow the Sun influence. Still, for a closing track the energy is really felt in the track and it is heavy enough that this is no way going to be a sleeper; the clean vocals even come back in, though they seem a bit forced in this time vs. when present on ‘Lavender.’ While the lengthier tracks can test patience, Svneatr show that black metal can still be rather upbeat and folk laden without the typical elements that so many other bands overuse. “Chinook” is a raw art form that takes some of the better pieces of the genre and throws it altogether for a minimal, yet effective sound. Black metal fans who like a lot of guitar and vocals but with a mid pace overall and a few surprise elements here and there with a sense of wonder will enjoy this effort. 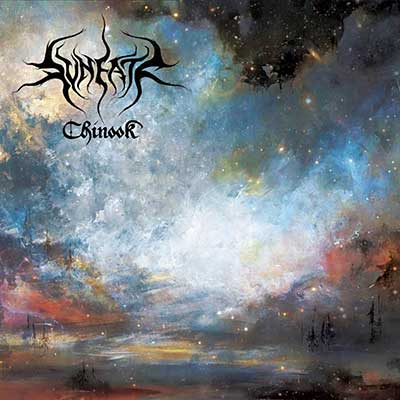