“Awaken” is the debut full length from Czechia’s melodic death metal outfit, Syridas. Just started earlier this year the group is a relative unknown in the metal underground, but has a sound that should garner much attention. While a lot of melo death groups like Soilwork, Arch Enemy, and Dark Tranquillity have kind of set the standard for melo death to be a focus on keyboards, harsh/ clean vocals, and excellent solos/ riffs, Syridas are taking things a step back and going more for an old school melo death sound that focuses pretty much on the strength of the vocals and the guitars. Think more Black Dahlia Murder meets At The Gates.

After a short intro one can really hear the Black Dahlia influence with the way the vocals are layered. High shrieks and deep growls contrast each other in a classic manner that will appeal to fans of the melo death genre as far as back as the very early 2000s, though Syridas tends to focus more on the higher pitched shrieks which some fans might not be used to as the lower growls are more what most would expect, but they aren’t quite that pitch that is annoying or too high, but still piercing enough to grab attention. The riffs from ‘Fall Into The Depths’ are a little repetitive but have lots of melody to them and tons of groove, so they have that right level of infectious sound that makes one enjoy it so much they actually want to hear it over and over.

Other tracks like ‘Internal Madness’ and ‘Creation Of Hate’ tend to trade melody for more solid, chunky riffs, bringing out the groove more but not quite having the melodic death metal flair that the other tracks have. ‘Brutal Heart’ is the highlight of the album for its choice of riffs, catchy chorus, and a very (early) Dark Tranquillity style to the music which separates it from the other tracks. ‘Rebirth Of Brutality’ shifts things a bit for more of an Arch Enemy approach to the riffing but the music hits harder without the more relaxed, churning tone of the other tracks.

‘Mind’ brings back more of the Black Dahlia influence but it is nothing that hasn’t been heard before so far compared to other tracks like ‘Internal Madness.’ This is perhaps the one struggle with the album as the lack of varying elements be it keyboards or clean vocals with the stripped down structure makes Syridas’ music tend to sound the same after a while, despite how good the riffs may sound. The Coldest Night’ finally breaths some new life by adding in acoustic guitar elements, but the band could have included this more throughout the album to add more variation to give the album more depth.

In short, “Awaken” is a solid album. Cleanly produced with no lack of focus on any instrument, but just a little repetitive here and there without the more progressive elements that so many modern melo death groups tend to add. Still, those who enjoy a 90s/ early 2000s sound in the likes of very early In Flames, Arch Enemy, At The Gates, and Black Dahlia Murder before the music was overtaken by clean vocals and keyboards to really make the melodies hit hard will find this album a lot of fun.

The riffs are icy just like the album cover and yet melodically wonderous like the northern lights to keep listeners rooted throughout the album. Vocally, it may take some getting used to with the high pitched snarls dominating the music, but the variety between high and low vocals add new dynamics to the music overall to keep it from sounding one sided. 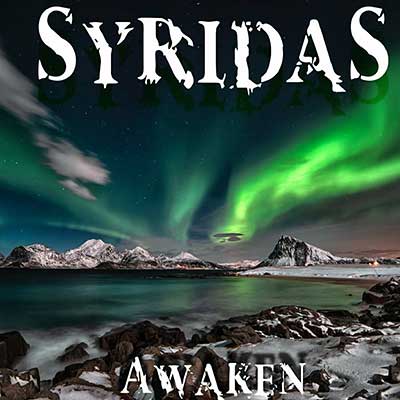