Invasion of the Viking Death Thrashers from Canada! Talamyus is a metal band that is heavy in every sense of the word heavy. These Canadian metal warriors present a powerful album with a sick title. “Raven’s Call to Annihilation” is a ten song blitzkrieg of thrash Viking Death metal. The guitars are loud with a sick classic sounding thrash tone and incorporate technical metal too. I love the palm muted riffs that give each song a powerful structure. The production on the guitars is really good and creates a well produced songs. In a sense the other instruments provide the rhythm and the guitar takes the listener away on a metal journey. The guitar solos on this album have a unique style that reminds me of classic metal solos mixed with the modern emphasis on technicality.

Now, the originality is lacking in the sense that I have heard a large group of new bands following this type of sound. The guitar riffs are well structured, but they can become repetitive after a couple songs. Personally on certain tracks I find the vocals on this album to not match up well with the thrash style guitar riffs. In certain parts the vocals are death metal then have this strange black metal sound. When it comes to metal vocals I tend to be more in favor of certain styles. If I am not completely sold on the singer’s style then I have a hard to really getting into the music. During the chorus in the song, “Spawn of the Elements” then singer’s voice matches the other instruments and I think it sound great with a triumphant feel. Unfortunately I am not hearing that on the rest of the album.

One song on this album that surprisingly different to the usual thrash distorted riffs and thunderous drumming is track five, “Remembering the Gods.” The song is an acoustic interlude and it reminds me of Metallica’s, “Fade to Black.” However, the song is completely original and uses some great chord progressions. Definitely a high point to the album and awesome interlude to the next song. Another song on this album that is wicked brilliant metal is the instrumental, “The Curse.” I am a huge fan of instrumentals and this song shows the high level of musicianship this band holds. There is this uptempo guitar riff and the rhythm consistently keeps me head banging. At the end of the song the lead parts are lightening quick and all these notes come crashing at once. The members in Talamyus seem to work well with each other and this album is a solid release. Of course I am not completely sold in certain areas, but I think that is subject to opinion. If someone is looking for a heavy guitar riffing album with the thrash Viking metal influence then I highly recommend checking out, “Raven’s Call to Arms.” In a world where metal is fighting hard to be recognized this album brings forth heavy elements that cannot be ignored. Raise your fist and sword while listening to Talamyus to get the full experience of a powerful Viking Thrash band! 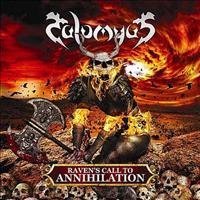