Tales Of The Tomb - Volume One: Morpras

This Canadian band are into their serial killers (like the UK’s Screamin’ Daemon and Macabre) and a touch of raw bare knuckle aggression, especially on the second track ‘The Pig Farmer’. Although mixed/mastered by Dan Swano, there’s still a different sound or style in reality delivered on each of the three tracks that’s different to the usual Unisound mastering. The opener ‘Snowtown’ is earthy old school death, slightly modernised, whilst (as I touched upon earlier) the second track ‘The Pig Farmer’, is a more serial killer aggressive fast and furious death metal rendition about a real angelic soul…not! The closer ‘Dr Death’ is a slower assault related to Harold Shipman lyrically and ties the theme lyrically together. Musically, that’s a touch more random. I find distinct differences in the sound. I must admit, with the recording credentials and band name and CD presentation, I expected a much more “rotten” experience…the moral of the story, don’t judge a book by its cover, there’s a nice cliché for you!

Morpras refers to a secret killing in old English, whilst the band expand the story of the serial killer theme, one thing that is for sure, theirs is certainly a hole in the market for this and I don’t mean an empty grave either. More often than not, the old US or Swedish sound is popular of late, so this is a touch different even though it’s a tried and tested passion in some other circles, I comment the band for expanding the scene rather than jumping on the retro vibe.

This should be a release to get Tales From The Tomb noticed. 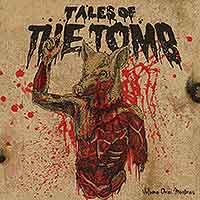