"The Daily Grind" is a gruesome, brutal, grindcore split between Nervous Impulse, Anüs, and Unsu. This album is part of a tenth-anniversary gift from Nervous Impulse – one of a series of splits between them and other masters of the scene. It was released January 18th, 2019 under the label More Hate Productions and it does not disappoint.

For some background, Nervous Impulse is a Montreal, Quebec based 5-piece comprised of Yan Chamberland (drums), Eric Fiset (vocals), Bruno Mercier & Francis Cousineau (guitars), and Daniel Bergeron (bass). They formed in 2007 and dropped their highly successful first album "Enough for Dementia" only two years later. They are currently recording and releasing a series of grindcore splits with other gods of grind as part of their 10th anniversary.

Lastly, Unsu is a veteran French four-piece. Based in Lille, France and formed in 2008, they are no strangers to split-albums as this makes their third (going alongside two EPs and a full-length). For this split, Unsu is composed of Adrien Voisin (drums), Manuel Grimaux (guitars), and Mickaêl Hivin (vocals and bass).

For Nervous Impulse, they deliver their usual standout performance. Singer aka Asshole is like a more brutal, cohesive version of AxCx’s 'You Quit Doing Heroin You Pussy' and I love every second of it. 'Vivre Et Laisser Vivre' had the most slamming drums of the entire album. And 'Fuck Everything' had enough speed, guitar, and brutality to shred your face like cheese.

On the Anüs front, 'Tangore' comes out strong as my favorite song from the whole album. It starts off with a light, almost Narcocorrido-esque guitar twanging, then immediately delves into brutal Cock And Ball Torture-esque madness. 'Analni' follows this up with some aggressive, violent guitars that reminded me of something Korpse would put out. Then they finish off with 'Assylum' which I barely have the words for – it has guttural growls, pig squeals, heavy & groovy guitars, take-no-shit drums, and a fuck you attitude – it’s great.

Closing out this audible onslaught is Unsu. They lead in with 'Steamroller', it’s monstrous, metal, and doesn’t pull any punches with its speed and tenacity. They follow this trend up to 'I Count Toten' which is my favorite of their part of the split – it has the same anger, speed, and technicality but its refined and a little groovier. For the grand finale of this album, Unsu delivers us 'Never Fed Enough' – one minute and forty-nine seconds of everything they have. By this point, it sounds like Unsu is tired and ready to leave the studio, but you can tell they’re still giving it their all.

Normally, I’m not a fan of split albums, but this thing is amazing. Where every band has their own niche in the grind genre, it all comes together perfectly. Combine that with the fact that Nervous Impulse and Anüs reminded me of some of my favorite acts, and it is an instant classic for me. This is definitely an album for any grind fan, by they new or veteran. You can give this album your whole attention or listen to it while doing something else. It’s a true winner. 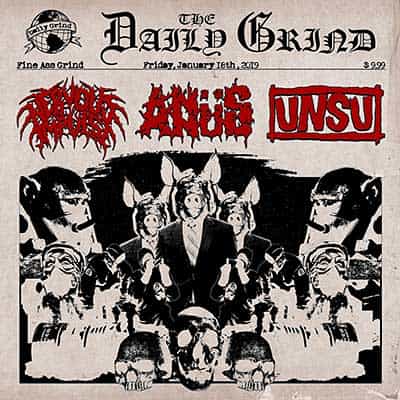