To start off with the support-act, The Difference plays standard mid-paced heavy metal. Every member knows how to play their instruments but there’s no show! The singer and bassplayer tried to connect with the audience, but I don’t think the band made new fans at this club.

Around 5 PM Belgium legends Killer stepped on stage. In the line-up were the 2 original members (Shorty on guitar, Spooky on bass) around which the band was built, back in the early eighties. It seemed that the band still focused on that eighties-feel. Killer, as a three-piece, was always compared with Motörhead. In my opinion they had better not added a keyboardplayer to their line-up. Still, they played a good show… and from a nostalgic point of view (I’d never seen the band live before) I really enjoyed seeing Killer live. Songs like "Ready For Hell", "Shockwaves", "Wall Of Sound" and the, back in the days often radio-played, "Kleptomania", stood the test of time. The reaction of the audience on the new(er) songs was kinda lame and neither a crowd showed up at their merchandise-stand after the show.

In the meantime more fans found their way to Baroeg and it was Agent Steel’s honor to fire some metal into the audience. For those who don’t know the band, Agent Steel made a couple of classic speed-metal records, namely "Skeptics Apocalypse" (1985), "Mad Locust Rising" (1985) and "Unstoppable Force" (1987). Their speed-metal is guitar-driven by Juan Garcia and Bernie Versailles, the band knows how to write great songs and part of their sound is also created by singer Bruce Hall. The fans saw an inspired band, that played "Guilty As Charged", "The Rager", "Children Of The Sun" and "Unstoppable Force" amongst others. Man of the day to me certainly was singer Bruce Hall. During previous shows that I attended in earlier years, and the chats that I had with him, I always thought he was a little cocky, not so friendly. But he’s changed and he has grown into a great frontman, with excellent interaction with the crowd. Bruce is blessed with a voice that can do it all, highs and lows, and he can easily reach all the high notes of his predecessor John Cyriis. On it went with "Mad Locust Rising", "Agents Of Steel" and "Human Bullet". Although the live-sound could’ve been slightly better, this was yet another great performance of the Masters Of Metal…… Agent Steel!! 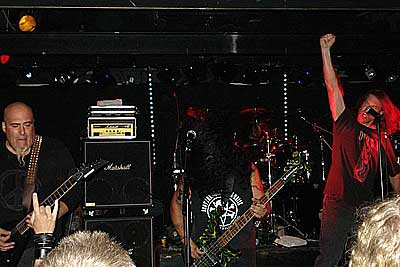