Thousand Year War is from California, but with their style of music one could very well consider them from Sweden. Much of the music performed here stays in the Gothenburg style akin to bands like At The Gates and Amon Amarth, minus keyboards. But, Thousand Year War doesn't need keyboards to keep their melody going. A lot of guitar rhythms have enough hooks to create any mood of catchiness while retaining a sense of brutality. Tracks like "The Sea" and "Storm I Ride" holds plenty of infectious melodies that are thrash and melodic death married into something pretty darn good. Many of the other tracks are straight up crushers like "Defiance" but all hold that same, chugging melodies over death vocals that work so well. There's even a few well placed solos here and there amongst the chaos to bring even more sense into the music.

Ultimately any fan of the Swedish melodic death metal scene is going to enjoy this band and their album. The entire Viking and War element is there to help create interesting stories, but it isn't overly done with cheesy lyrics or other atmospheric features like clips from sword battles, tons of flutes, and drinking melodies. Everything here is just enjoyable metal with a few thrash influences thrown in to create something that has its own sound and doesn't come off as a direct copy of a fellow melodic death viking band like Amon Amarth, but draws enough influence from the group that they can be enjoyed in the same vein. 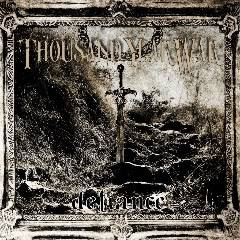 Self released
Reviewer: Colin McNamara
Apr 11, 2010
Next review: The Final Harvest - The End