Thumos - Nothing Further Beyond

There is always something enigmatic about metal bands that try to remain a complete mystery by leaving a very scarce trace of any history, member information, or anything to really go off of, save for the music they present. U.S. based Thumos is one of those groups and creates a sound that is considered progressive post doom. No lyrics, no vocals, just all instrumental. Their second EP “Nothing Further Beyond” sounds ominous and dark, but the music is full of very groove laden riffs and sound almost upbeat and catchy (just listen to the thunderous ‘The Chariot.’) While the music here is not as wildly progressive and jarring as groups like Black Crown Initiate’s instrumentals (or Animals As Leaders) or hypnotic as Sleepmakeswaves, but the thick atmosphere created by the guitars and bass with the echoing drums is certainly hypnotic enough. The music may get a little repetitive over time but that’s part of the charm when trying to create an ‘atmospheric’ instrumental album. The opening ‘Ecumene’ is kind of a seductive lie with the thick epic drumming and orchestral elements to draw listeners in because this is the one time one will hear that. Then it delves into the thicker, fuzzier doom/ post metal with ‘The Pillars’ which sounds dark, dramatic, and like it belongs on a Septicflesh album. The riffs are a little basic and repetitive but things pick up more towards the guitar solo which adds some progressive elements.

Tracks like ‘The Noble Lie’ and ‘The Dilemma’ is where we get more into the groove element of things. Still dark and foreboding with its slow tones, the way the riffing goes sounds a little like some of the instrumental work heard on the self titled album of black n’roll band Satyricon. Here, Thumos aim for more drawn out tones to enhance the crackling distortion which buries the drums a bit, so despite the uptick in pace a little bit to add a bit more oomph to the music, the overall feeling is still heavy and doom related (very little presence of the prog driven solos that were heard earlier on the album). ‘The Great Beast’ brings things full circle with a slow, depressing and thunderous tone, not as crackling and dark as some of the other tracks, but definitely the slowest and ‘grimest’ of them all (think Deathspell Omega grim).

Overall, the variety between tracks seems exciting at first but tends to wither away as the album progresses as each track tends to blend together with the repetition of certain riffs, but at least there is enough to discern between each track rather than feel like the album tends to run together for just a long single 26 minute track. Fans who know of Thumos already may be disappointed that the band has reined in a bit on their ‘epics’ as most of these tracks don’t span past 7 minutes, but with the pace and tone of the music most of these are just about right. Not too short, nor too long to feel like they drag on too much. Thumos could certainly flesh out the orchestral elements more as those are exciting and different elements that really made the album start out strong, but this instrumental entity is definitely worth looking into for those who want a type of music that is somewhat meditative but won’t put them to sleep out of boredome. 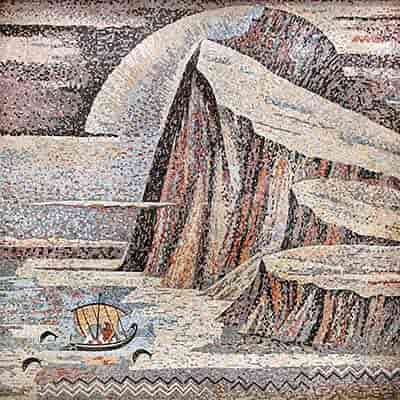