Devoid Of light is the debut album from US black metallers Uada. To be honest a 33 minutes and just 5 tracks I think they are pushing their luck slightly calling this a full length I think another song would have done. Anyway that small gripe aside this is a fantastic debut.

The formula runs the same with each track which is blazing well crafted black metal but the melody throughout and it’s super catchy. The title track for example is superb with a haunting riff to kick things off before leading into a blastbeat but then licking to a fantastic groove. While I mention earlier about there being 5 tracks all are over 5 minutes so all the songs can go off on their own little journey. All the songs run through different sections and are all well thought out, they are actually quite hypnotic in a way because the songs do blend together to make the album stand as one piece. The vocalist also does this howl that only King Diamond or Dani Filth can pull off and it sounds awesome!

The albums highlight is the 9 minute closing track 'Black Autumn, White Spring' this track is just fantastic, it builds and builds towards a climax were the band are so tight, there is a blistering solo towards the end and the album closes brilliantly. I’d love to see this last track played live.

I can’t stress enough how catchy and melodic this album is. I would actually give this album to play to someone in order to get into black metal; I think there is a massive crossover potential for this band. There’s talk of them being a MGLA rip off, personally I don’t hear it. Certainly not enough to warrant calling them a rip off. It has the essence of black metal where on the surface it’s ugly and hellish while there’s beauty hidden in its depths.

This is a fantastic debut, it gets better with every listen. You very well may hear more brutal, abrasive, dirty, darker black metal albums but you won’t hear one this catchy and instantly memorable. 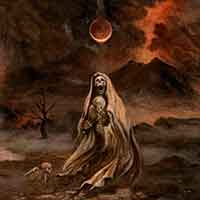