Ulcerate - Stare Into Death And Be Still

Ulcerate is probably considered the ‘Deathspell Omega’ of death metal. Ever since they exploded into the music world with their debut back in 2007 these New Zealand destroyers have created a hellscape of music that is raw, chaotic, and epic with slightly deeper vocals that can easily be mistaken for their French compatriots who go the black metal route with this kind of music. While Ulcerate’s sound is very unique and their ability to pull off 7 plus minute tracks without using filler is fantastic, the only downside to their last several releases is that they kind of stuck to the same formula, making it hard to really differentiate between albums.

Granted, their last effort “Shrines Of Paralysis” really stepped up the chaotic factor in structure, finally cutting a little back on the distortion haze and showing a whole new level of technicality to their guitar and drum work, but the roller coaster styled riffs that were all over the place still felt a little ‘been there, done that’ to those who have been spinning albums as far back as “The Destroyers Of All".

Thankfully, four years later, Ulcerate unleash a whole new kind of technical hell without altering too much of their sound with “Stare Into Death And Be Still.” To listen to Ulcerate in general is like staring into death because of just how weighty and chaotic their sound is. The guitars swirl around the ear with a unique whine that is very stop and go while the echoing vocals will haunt one’s dreams long after the album is over, and the drums are just sheer hellfire. Its fast- as technical death metal should be - but the way the band layers their distortion and ties everything together makes it a different kind of fast, and rather unique for those who feel the term ‘technical death metal’ is mostly reserved for those who try to be like Archspire or Beneath The Massacre or Origin.

Longtime fans will notice that the production has been cleaned up just slightly but sounds like it belongs on the previous album “Paralysis…” with the opening ‘The Lifeless Advance,’ even with the pace slowed down a bit. As a result, many may feel the group has gone even more down the Deathspell Omega route and lost a bit of their ferocity in turn for more ethereal, grim touches to the sound. The guitar solos seem to have a little more presence than past work when hearing tracks like ‘Stare Into Death…’ which is a great progression because in the past they tended to get swallowed up with the rest of the music. The real thing that separates Ulcerate’s new effort is the groove they add to their music.

‘There Is No Horizon’ is when listeners will start to notice a shift in sound. It isn’t as obvious as adding suddenly clean vocals or keyboard/ piano, but just the way the riffs are structured one can tell that Ulcerate tries to go for more of a haunting tone with quieter guitar passages rather than overwhelm with the weight of every instrument being thrown to the ear at once. While some of the technicality is lost, the trade for melody and just a little bit of ‘quiet’ really shakes up the tracks and gives listeners a moment to breathe before being swallowed up again, which is something listeners of Ulcerate haven’t really had a chance to experience yet.

Other tracks like ‘Visceral Ends’ really slow things down to almost simplistic guitar work through most of the track, which kind of builds the suspense of the music before exploding, and the chugging riffs still have plenty of groove to them. It is the drums that then get the attention for the technical work, which further solidifies Ulcerate’s place in being very skilled death metallers. ‘Dissolved Orders’ closes the album by tying everything together- its dissonant but slow and groove oriented with plenty of speed from the drums and the bass rumbles along without being overshadowed by the distortion.

For new listeners, the vocals are probably the hardest thing to get used to. They don’t bark in the usual death metal fashion and with their echoing distortion they can rather hard to understand, but they probably serve as some of the most terrifying part of the album and really unsettle listeners, much in the way Australia’s Portal designs their music. For longtime fans, the vocals sound as good as ever- maybe even clearer- and many will still marvel how the vocalist can do what he does. The tracks of “Stare Into Death…” are still epic so there is a lot to digest, though they don’t really go past the 9 minute mark so it isn’t like the music carries on forever, and Ulcerate have done longer tracks before.

While certainly carrying a funeral doom weight, Ulcerate make sure the tracks on this particular album are varied, whether it is the way the inject the slower moments in their music or how they go all out on their pace, but fans of technical or ethereal death metal in general will find it one nightmarish listen they will certainly enjoy, and possibly the perfect soundtrack to 2020 itself 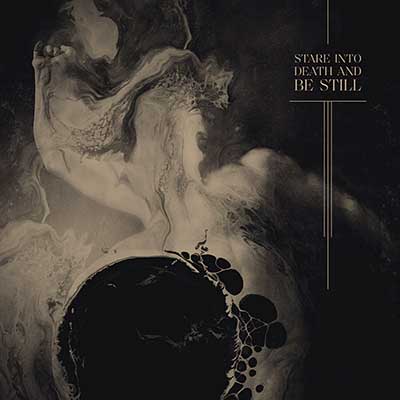 1. The Lifeless Advance
2. Exhale The Ash
3. Stare Into Death And Be Still
4. There Is No Horizon
5. Inversion
6. Visceral Ends
7. Drawn Into The Next Void
8. Dissolved Orders