Ulysses Siren - Above The Ashes

This is a compilation of this Bay Area bands demo material and is thoroughly authentic being recorded in 85-87. The sound is classic, the style is of the early innovators such as Exodus, Slayer and some traces of Heathen, Dark Angel and Violence…it is fast and furious…and a lot of this material preceded some of those thrash godfathers.

Ulysses Siren used to include the recent departed Jon Torres (on the 87 demo, tracks 4 to 7 on this release) famed for this bands 2012 demo and most recently featuring in Heathen. These recordings are simply classic, they were a band before and during the breakthrough to the mainstream of some of the bands mentioned earlier in this piece and this compilation its starts out very promising with ‘Terrorist Attack’. Moving onto ‘The Reich’, oh man, this is what it is all about, a classic west coast thrash snarl, some Sabbath-esq riffs and fills and pounding echo driven drum sounds and really sharp vocal screams. The sound is raw, you can feel the atmosphere of 1985, take out some of your original traded tapes, take in the aroma, play this and you will get it, you will be authentically transported.

The later 87 demo begins with an instrumental called ‘Leviathan’ and quickly powers into ‘Above the Ashes’. Now this one shows a more refined guitar tone, more punchy less chaotic, the band obviously learnt their trade by this point. It does lose a raw energy, but you can clearly hear a bands progression, although it is not as stark as the transition and growth of say the first three Metallica releases. ‘No Trace of Shame’ is the nearest to album quality, the guitar tone and vocal angst keeps the track firmly routed to the ground though. There is a genuine rawness mixed with a development of their song arrangements. The track slows to a catchy crunching thrash marathon later on the track, hmm, I am going to have to play this again.

What more can I say about this, I love the sound, I love the band, they deserved more recognition, but it’s like any scene of any sub-genre. For all the big bands that breakthrough, the criminal element that some of the better bands were overlooked in favour of their musically lesser peers, it is just the state of the “machine” I am afraid. Let’s hope Ulysses Siren re-ignite themselves further, the world needs to hear this band, maybe I am overexcited by re-living my youth, but this is to me a genuine rating worthy of each and every bead of sweat generated whilst thrashing around to this. 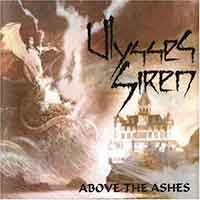