I’ve written before about this original bay area thrash band, that used to feature Jon Torres before his untimely death, the opening track and EP title ‘Justifiable Homicide’ forst appeared as a demo track in 2012 and was reviewed accordingly on this site. Sticking with the EP release version, if you are after classic bay area stuff then this is the stuff that dreams are made of. There is more than enough references to early Exodus here, it’s gritty, moves well and keeps you motivated! ‘Bludgeoned Mass’ is  the same, heads down, balls to the wall bay area thrash with a nice touch of aggression. The final studio track of the release is ‘Lethal Inception’ which is another rabid thrasher, this has a cool intro solo and a tight sense of moshing going on throughout.

Unfortunately, that’s where the quality stops. The remainder of this EP are poorly recorded live tracks that have such a muddy sound, it’s hard to distinguish anything, but I guess it is a genuine live recording! ‘The Ritual’ is a  Destruction cover track from ‘Infernal Overkill’ and ‘The Reich’ is a really great track from Ulysses’ compilation release ‘Above the Ashes’. It’s a shame it’s not better represented with the sound quality although this is much improved compared to the other two live tracks.

All in all, the three studio tracks are really great bay area thrash, it’s such a shame about the live recordings, but in any case this is still work checking out but if not for those fabled tail end of release tracks, this would be scored higher…but I am going on the complete package. 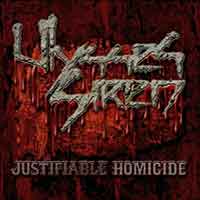