"Mallorca's Unbounded Terror was one of the very first Spanish death metal bands. It was formed from the ashes of band Toxic Waste, and after that they were called Putrefeact Monstruosity until April 1991, when they adopted the name Unbounded Terror. The band was promoted by legendary label Drowned Productions whose owner, Dave Rotten of Avulsed has been a very good friend of band's leader guitarist Vicente Paya since 1990. After releasing Nest of Affliction in 1992 the band was "frozen" for a while by Vicente because of the problems with the line-up. With the inclusion of a new member, singer Amon López, and the brothers David Garciolo (on drums) and Gustavo Garciolo (on guitars), Vicente founded a new doom project called Golgotha. After signing a deal with Drowned Productions and releasing the Caves of Mind EP, the project became permanent, replacing Unbounded Terror and effectively ending the band."

That's saved us some time! Admittedly, one of the things that's caused this review to be put off for so long is the simple fact that until recently, there just wasn't that much information about Unbounded Terror online. I'd heard "Nests Of Affliction" through a friend a great many years ago, but that's as far as my experience took me, which is hardly surprising considering how low-key the band was. But I digress, their first (and only) album has received a full re-release that boasts an impressive array of bonus material - twelve tracks worth, in fact. Simply put, the core of "Nest Of Affliction" remains for the most part completely unchanged bar the required 'volume boost' and the original mix seems to be almost completely unchanged. Whether this is for better or worse is entirely down to opinion, as some people such as myself quite enjoy the old school death metal production style in all of it's messy-yet-tight glory, whereas those who have been weaned on more recent (and in my professional opinion, rather overproduced) bands/albums could possibly be put off by the rather scratchy, thin guitars or piittery-pattery drums. That said, the core ten tracks of the album are still vicious beasts that easily ranks "Nest Of Affliction" amongst the likes of "Butchered At Birth", "Effigy Of The Forgotten" and even the almighty "Leprosy", and it shouldn't be overlooked because of its age, production or relative obscurity by any means. The bonus tracks however, though plentiful, are somewhat unfulfilling for the most part. Tracks 11 through to 14 boast the best of the bunch, with track 11 'Silent Scream' being an unreleased live track that was never recorded and tracks 12 to 14 coming from their 1993 demo which gives us a glimpse at what could have been had the band not disbanded follow it's recording. The remaining tracks however, are from their 1991 and 1992 demos that contain most (if not all) of the tracks on the core album itself, and while it's neat to hear these tracks in their rawer, 'prototype' forms, they ultimately fail to live up to their studio counterparts and do little more than to pad out the tracklisting. On top of this, the album's artwork has been completely redone and although it still looks pretty good, I must say that I'm a much bigger fan of the original art.

All in all, despite my gripes with the new artwork and some of the bonus material here, this is by far the definitive version of "Nest Of Affliction" (especially considering the fact that you'll probaby never find an original pressing) and fans of old school death metal would be absolutely idiotic to pass it up. Anyone who was a fan of their back in the day will definitely want to try this one as well considering the plethora of unreleased material present here too, and it stands as further proof - in my eyes at least - that bands had a hell of a lot more to be angry about back in the early ninties and made better music as a result. Check out this 2011 re-issue of "Nest Of Affliction", it's a great package. 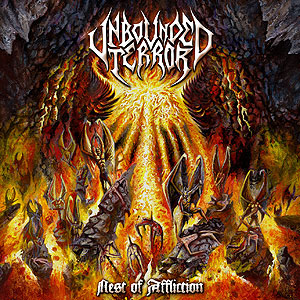