Unchained Beast are a young heavy/thrash metal band from Vardø, Norway located in the Northern Finnmark County. Formed from the ashes of a Metallica tribute band, Unchained Beast have been together since October 2010 playing local gigs and establishing a local fan base. Influenced by the thrash metal’s “Big Four”, Metallica, Megadeth, Slayer and Anthrax among others, the band creates a modern, dark thrash metal but with elements of older thrash.

The First Breath Taken
This young Norwegian thrash band that don’t sound or indeed even look like a thrash band, but are highly versed in epic beginnings and subtle yet explosive raids on the unconscious mind as they really deliver a powerful start to their debut E.P with this overwhelming composition.

Guiding The Lamb
Right!!! Now the blistering brutality really begins, opening with a serious heavy chug of carnivorous rhythms that sizzle with caustic frenzy. Vocally gritty and malicious with a deep solid pounding of drums. The metal flame is just beginning to reach its endeavors within this hungry track.

Gates Of Dumbr
Another surprising track that takes a turn for the subtlety that lies within the sophisticated stringed arrangement and closely followed by a raucous beating that soon turns the corner and rampages be it skilfully, into oblivion with a hammering of rich and fast paced riffs that have thrown off the shackles of their humble beginnings and neatly embedded are some heavy but sneaky bass hooks thrown into the mix!

“It is a superb E.P that needs to be explored fully to appreciate its shifting patterns of extravagance!”

The Infection Of Mankind
The unusual staccato of strings are fierce and protrude through a devilish hammering of beats that wake the subconscious from its slumbers. This track literally scorches with a gigantic blood curdling and epic vocal range that does not douse the flames but fans them to reach greater proportions. Superb rhythms and muscular riffs make this an amazing track to behold, slowing to a crawl and producing some ambient proficient strings and solid bass hues to the proceedings.

Split Of Conscience
And more of the same sophistication is followed on the final track of the bands finely tuned E.P. Of course it again turns a corner and ignites a vicious spark that manifests into an outpouring of menace. The vocals are softer as is the music but the ambiance produced sounds sinister and beautiful at the same time.

Unchained Beast is probably a good way to describe this band. As once the shackles are off, as they lash out an air of rampage and then as if the band are in shackles once more they seem to calm and take on a very different level of sophistication. This is one thoroughly enjoyable E.P that possesses subtlety and variety in each of its offerings and of course the ravenous metal prongs are evident too, so what you get is a bit of everything. It is a highly sophisticated musical debut that hosts plenty of appeal and individuality. The chemistry between these guys is pure magic.  Shining like a beacon for all to see and whipping up a storm of pure extremes that work really well together. Starting off slow and deliberate it then manifests into a ferocious jaunt and then simply calms, giving off an elegant glide, so you just don’t know what the band are about to do next!

It isn’t all-out thrash, it sounds progressive in parts and I would even go as far to say that there are indeed some tender classical moments to be had within this musical master-piece, but it all depends on whether the beast is unchained or not as the case may be. It is a superb E.P that needs to be explored fully to appreciate its shifting patterns of extravagance. If you asked me to describe this in two words I would say majestic and raw! And it really sets the stakes high! 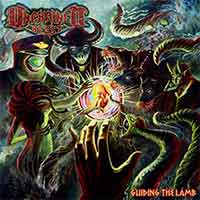