Unconsecrated - Awakening In The Cemetery Grave

Fucking old school death metal... That's what strikes you when you enter Unconsecrated's lair for the first time! The band is from Spain and they are not really old! Only six years in their back, but their musical influences breathe deeply in the early 90s Swedish and European death metal scene in general! Entombed, Unleashed, Carnage, Grave and many more are responsible for Unconsecrated's approach to their death metal. "Awakening In The Cemetery Grave" is their 2012 release and it is a compilation CD of their entire material. On this CD you can find their first two demos: "Unconsecrated Cemetery" (2006) and "Dark Awakening "(2007) as well as their 2010 EP "Slave To The Grave", all remastered in 2011!

Heavy riffs, heavy guitars, heavy vocals, and guess what... NO BLASTBEATS ladies and gentlemen. No sir... old school death metal that pukes a heavy reek of demise right from the start until it has you down on your knees, bowels out, trying to grasp your last breath, thinking what the hell hit you! Based in mid tempo riffs and a really 'straight from the grave' guitar sound, Unconsecrated have built their own nightmare, consisting of the so typical thrash metal drumbeats, following the lead of a slow crawling old school death metal riff, covering lyrical themes of gore, zombies, brain eating and many more Christmas goodies. With song titles as:' Journey Into The Crypts Of The Dead', 'Recremated By The Sunlight' and 'Recently Deceased', it is very clear that those guys take death way too serious!

In their attempt to bring a grave atmosphere to the listener, comes the production of this whole compilation CD to make things even more rotted, as it is dirty as hell, but also lucid enough so that one can hear everything loud and clear. It also manages to give solidity to the songs which feel like they've been recorded at the same time, date and place although they come from different recordings! The whole package comes with a fitting song cover on Unleashed's 'Dead Forever' and also a fitting CD layout filled
with zombies, cemetaries... etc!

"Awakening In The Cemetery Grave" is the perfect 'get to know the band' release as someone can find their entire discography in the price of one. A 'must have' for the old schoolers but also recommended for the blastbeat freaks out there!
Still not convinced? Well I don't know about you but I'll search for a nice grave to lay my rotted corpse tonight... 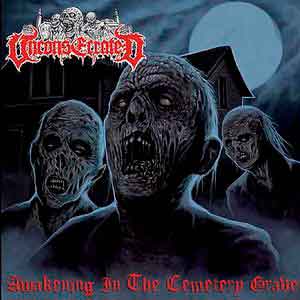