Unconsecrated, a 3 headed death metal band from Spain. Apparently they formed in 2006 and have recorded 2 demo’s since then. These 2 demo’s haven’t been released as if they were demo’s though, in 2008 the band put both of those demo’s on 1 disc and that disc is Unconsecrated Cemetary.

I bet those demo’s had quite long play time, because the disc has almost a full hour of death metal to offer. Old school death metal that is, played fast with grooves and a nice old school sound. To cut the crap right away, Unconsecrated has nothing “new” to offer to us, they do however bring some damn good old school death metal to my ears. The tempo lies mainly just in between up- and mid-tempo, but also goes up to high speed and sometimes a slower (almost doomier) tempo. Raw deathgrunts, quite easy going drums and not to original riffing, but damn this goes down very well.

I believe the first 7 tracks are from one demo, tracks 8 up till 13 are songs from the other demo. The formula on both these “parts” is the same, old school death metal. The 2nd part of this disc has a somewhat heavier sound and has a little more polished production. Also the vocals are deeper, but less powerfull then on the first part.

If you’re a fan of old school death metal, I highly recommend you to check out this band, because this is simply good stuff. 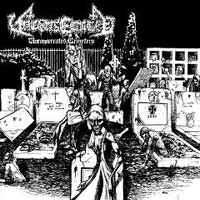 1. Recremated By the Sunlight
2. Journey Into The Crypts Of The Dead
3. Morbid Dawn of the Deceased
4. Unconsecrated Cemetery
5. Recently Deceased
6. The Curse of Evocation
7. Dead Forever (Unleashed Cover)
8. Path of the Ancient Gods
9. Dark Awakening
10. Over the Throne
11. Temple of Darkness
12. Descending into the Abyss
13. Tombs of Fallen Angels