Undead Creep - The Ever Burning Torch

Fans of foul rotten Swedish style death metal have been rather lucky in recent times. There has been a massive resurgence into this style and scene, and not always limited geographically to Sweden. Fatalist, Feral, Lifeless, Miasmal, Entrails, Morbus Chron, and Horrendous are some prime examples, and Undead Creep have been high on my radar since I bought their cassette tape demo a while back. These Italians know a thing or two about this genre, this style, their execution of thunderous, rotten explosions make it essential death metal. ‘The Ever-Burning Torch’ motivates you to get up off one’s ass and fling yourself senseless to these nasty tones of pure, organic, real death metal.

‘Immolation for Reincarnation’ leaves all misconceptions and illusions shattered; it’s utterly brutal from the opening chords. Growls, howls and screams may make you wonder if there is murder a-foot, but in my mind, this really, and I mean really strengthens your faith in classic death metal. Going straight for the throat and with relative speed in mind, there are no death n’ roll comparisons, this is rooted in even earlier Swedish death metal heritage, you should all know whom these “founding fathers” are by now, I have mentioned them many-a-time in reviews, but Undead Creep rather than being a copycat still manage to inflict a sense of passion and excitement about their music with speed whilst not omitting the rumbling relative slow paced numbers like ‘Eternal Rest’. The ‘Interlude…’ is welcomed, just in case you need to take a breather before delving back into a state devoid of all well-being, you really are ‘Swallowed by the Chasm’. Oh but that’s not all, tracks like ‘God’s Disdain’ really have all the elements comfortably numbing your neighbours brains to the point of wanting you evicted, if they are not already numb from a perfect guitar tone.

Rising from a grave, surrounded by corpses, entrenched in death, so many cliché’s I could use here, but what I really need to stress is that this is a perfect pennant for all rotten death metal maniacs, and it’s an essential purchase. This CD version I have for review also contains the original demo that was released as a cassette, this is a massive bonus, you hear Undead Creep’s raw beginnings and then you can then appreciate that recording their full length album has not killed any raw talent and aggressive tendencies as so is the folly of some recent first full releases. Of course, going into organic places you will also find a vinyl version in a cool gatefold cover. The sound quality of this release edges them slightly ahead of an ever increasing chasing pack.

Rotten to the core and dripping with undead thoughts and emotions, ‘The Ever-Burning Torch’ is one hell of a debut album. 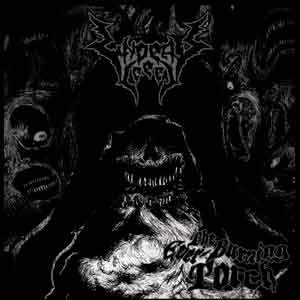