Although Undead Pandemic is a one man blackened Goregrind band from the UK, the music on the release 'The Rising' comes across as so much more than the average Goregrind expectations. Rather than pummeling drums, short tracks, and guttural deep vocals, sole artist Ben Murphy aimed more for atmosphere than brutality here. Much of the music is distorted with electronic effects, giving it a strong Post/ Avant-Garde feeling, and from the low, grating spoken word tones that are heard on numerous tracks, there is even a Gothic Black Metal feeling to the music. Tracks like "Grim" are a fantastic example of how horror Goregrind should be with the low, rumbling bass and electronic effects that carry out the lyrics behind the nightmare and then suddenly everything quiets down for soft, ambient effects that sound like they came from a game like Dead Rising- a perfect setting for listening to this album in a room with no light at all. "Black Lightning Rapture" throws in some more symphonic elements with the keyboards which give a whole new aspect on atmosphere, but at the same time the overwhelming sound from the bass, guitars, drums, and keyboards drown the vocals out more than usual, which sound often like they are being rasped through a microphone headset.

"Obscene Deformities" is where Undead Pandemic steps more into the typical role of Goregrind as the atmospheric elements are removed for just heavy distortion and churning guitar with the vocals a bit more growled and some pig squeals thrown in for good measure. Still, the distortion and beats in the background still throw in some electronic effects to make the music tasteful, making it feel like a Goregrind remix. The bonus tracks are like listening to a whole new world of Undead Pandemic as some of them must have come from previous demos as the vocals are much more distorted, more screaming and roaring while being difficult to understand as the drums also sound more monotnous such as with a track like "Carrion." "Blasphemous Insidious" brings back a bit of the atmosphere with the distortion and strong focus on the rumbling bass and drums, but the vocals have pretty much been shoved aside, making it sound like they're being bellowed from a casket. Overall, fans will probably take a liking to the earlier tracks as opposed to these, but they are a strong testament to show where Undead Pandemic is going. This is an innovative step for Goregrind that also show the ingenuity of Murphy's work to be a multitalented artist as well as composer to give listeners a new spin on a genre that tends to overdo itself. 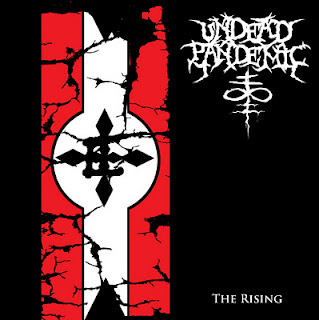