Undead is an international band formed mostly by Spaniards and a singer from England and formed in 2013. This is their second EP named "Redemption". The first was "Blood Enemy" consisting of only two tracks.

Well, this sophomore is a five track EP of old school death metal, with some old brutal influences and an obscure, evil and dense atmosphere in all the songs, like Possessed brutal influenced, the touch of the olds with some blast beats. The members are veterans of the Spanish death metal scene, coming from different bands. One of them, the drummer Alfred Berengena is in the line up of many bands, and a reference in death metal drumming in Spain.

The music of Undead is like an old terror film, with old fx but with nowdays technology, with a good taste in all the passages, and we like it. We have seen before that many bands are getting the old school days and with good results, and getting the same spirit of that sound that we liked and still do. This band have got all those requirements, everything breathes underground, sound, image, artwork by the vocalist, is like 25 years before formed band.

A pity that this EP is only 13 minutes long. I hope they record a full album with this intensity and spirit soon. They deserve your attention, if you trust in true death metal, this is for you. 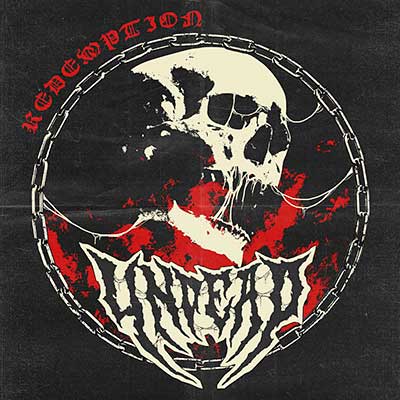