Under The Church - Rabid Armageddon

Raw old school death metal fans will know exactly who this band are, in short, some members were once in Nirvana 2002, considered by many a truly underrated band. Under The Church continues that heritage and the last ‘self-titled’ EP gave the fans what they wanted. Fresh out of the graveyard with this full length effort, the vintage style is very much a healthy dose of rotten. The sound is cool, the production is a little disappointing on this mp3 review version in the centre section of the release. The drums are just not that audible on certain sound systems. However, on a decent system, the reverb led vocal and tirade of the opener ‘Sodomy And Blasphemy’ delivers on all fronts. ‘Triad Ov The Inquisitors’ is a much more doom death Autopsy driven slab of annihilation (and really applicable on ‘Penance’), whilst the punk infusion of ‘Magnus’ keeps your mötor(head) energy topped up. ‘Mangled To A Bloody Mess’ sounds odd, the timing of the guitar and the drum through the verse section almost makes the sound laboured, it’s the cymbal crashes and solo that picks up the chaos more for me. At least there is variety on the album!

Lyrically, there’s some interesting stuff being regurgitated, have a listen, it’s a touch more in depth than your usual old school death metal juggernaut. But there is a reason I have not rated any higher, and that’s simply the represented mix. It suffers in places for audible clarity between the various instruments, especially on the faster tempos which sometimes leads to a loss of the snare drum and a touch of distinction is lost on certain guitar parts, you could have got away with it if it was released way back when. However, for the songs themselves, it is authentic and makes you thirsty, you feel dirty, rotten, and all the clichés yes I know! For the music alone, "Rabid Armageddon" is a killer effort and this will be very interesting to hear in a live gig, especially the morbidly perfect closer ‘The Trial Of Chthulu’. 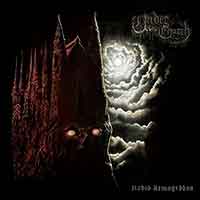