There's no better emotion than a band that crushed your disbelief on them, right in your teeth, and made you turn your mind 180 degrees on the good side (...and of course the exact opposite among others should be some of the worst). Well this happened with those brutal death metallers from Tomar-Portugal! Their CD layout and country made me think that I had to endure the hearing of a band that sounded like shit once again for a whole album. Not that I have anything against Portugal. On the contrary, I think of Portugal as a really beautiful country. It's just that Portugal hasn't given any signs of death metal worthy of mentioning lately, and that, along with their cover image (...seriously my 10 year old nephew could have created a more convincing layout) led to mistaken conclusions! Music once again had to prove me wrong and teach me once again that you don't judge an album from it's cover or name! So... let's begin.

Underneath is a band from Portugal that breathes musically from 2002, and since then they've given out a demo, an EP, a DVD, a split DVD and their first full length on 2012! "Gruesome Evolution Respawned" is its title and it is a good mixture of blasty and fast death metal with an aura that gives out a love for older times! Swirling riffs and drums that hardly catch a break, always on the blasting mission! The vocals are the typical death metal growls with some shrieks here and there that add a bit more flavor to the whole outcome! The whole release consists of ten songs, odes to barbarity with lyrical matters concerning social issues and inner thoughts as they say! Not bad at all don't you think?

"Gruesome Evolution Respawned" has a solid and typical song construction! Mainly small duration songs that do not irritate the listener with their length. No long solos and no unnecessary intros or xtra blabbering to draw attention! Their music speaks for them and what it has to say is very promising! Maybe they should pay a bit more attention on their riffing on the next album! And I just say maybe cos it might be only me but, after a while I had the impression that I was listening to the same riffs! Strictly a personal opinion and certainly NOT a big black spot to this album! Just sayin... I mean a band that blasts like hell, growls like there's no tomorrow, and has its song construction ability rated way above medium is definitely something you should check!

Underneath is absolutely not the band that will make you re-position your place for death metal, nor the one that will make you hate it! They are doubtless though, the band that will make you spend a nice 35 minutes of your life, knowing that it wasn't for nothing! Good choice for those who want to look deep into the death metal scene of Portugal (myself included). Fans of Behemoth and Morbid Angel should already be listening to it! If not grab a copy now! "Gruesome Evolution Respawned" is a direct brutal death metal album that besides liking or not gives out something bands lack these days! It's clarity fellows. Definitely worth a shot! 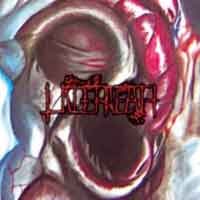