One of the most notorious black metal bands hailing from Brazil, Unearthly was established by the end of 1998, with M. Mictian on bass and Lord Thoth on guitars and vocals. The group's first demo, “Blessed are the Destroyers of False Hope”, was released in June 2000, and the second one, “Living under the Sign of Blasphemy” was launched in august 2001. But it was only in 2002 that “Infernum – Prelude to a New Reign”, their debut full-length album, was released. In 2011, after two years working on new material, Unearthly finally entered Hertz Studio (Bialystok, Poland) to record the album "Flagellum Dei", with Wojtek and Slawek Wieslawski (Vader, Hate, Decapitated). With eleven tracks, "Flagellum Dei" was released in Brazil in November 2011, and was also released in Russia and Ukraine. For 2014, the band is currently preparing great material perfectly balanced between extreme black/death metal and Brazilian music. This release will definitely solidify Unearthly's name as one of the greatest bands in the hall of extreme metal. The European version of the album will be available on CD (Digi-pack) and LP. Get ready for eleven tracks of extreme black/death metal heavily influenced by Brazilian music!

Seven Six Two
Not the opening I expected with its ambient strings, however there is still time for the malevolence to strike – and it does with its symphonic glory of blackness.

Baptised In Blood
This track is intense, strong and captivating driven by a bleakness that subsequently dabbles in the art of blackness. Vocally strong and toxic it resembles a demonic scathing that slips into the aural cavities with utter abandon and a sonic battering of forceful beatings and surprisingly back to the ambient strings once again.

Flagellum
Equally as demonic as the last track this one has a kick like a mule and is highly satisfying as its strength is driven by pure evil intent as the guitars scream in agony of a persistent and grueling journey into oblivion.

Black Sun Part 1
With a pummeling like no other this track springs unmercifully into existence, ravishing all it surveys. Flirting with muscle bound intent the rapaciousness is spearheaded by gruesome vocal dexterity.

Osmotic Haltesis Part II
Formidable and to the extreme this blackened mass of enticements, exudes lustful passions of eager essences that are vital in producing some fueled aggression and indeed vocally savage.

My Fault
With melodic fluid grooves this track offers a slower and more precise feel with guitar riffs that simply explode into an extreme savagery, that literally stomp at the gates of hell.

Eye For An Eye
Another rigorous offering of brutal insurgency feasting greedily on the aural and brings with it a banquet of emotive responses. Engaging and pleasurable it takes the listener further into the darkest realms.

Lord Of All Battles
With an interesting and ambient flavor, this track opens, it then looms ferociously into a tempestuous malevolence of fire and brimstone. Embracing a harsher edge of caustic prowess.

“It gives the listener a respite from the totally brutal and gently pulls them down to less extremes, whilst still carrying that malicious side.  To look at the band you would think they wouldn’t know what gentle was but underneath all those studs, chains and maquillage or Corpse Paint as it is better known are three savage beasts who turn into angelic musicians when the mood takes”

Limbus
An aboriginal feel to this track as it gathers momentum. The dark hum of sound is lavished in black ambiance and ripe with intrusive rhythms.

Insurgency
Vocally frightening, this track just leaps out of the speakers and throttles the aural with the most potent of screams. The dramatic sweeping of rhythms languish brutally, covering a formidable sound-scape of vibrant riffs and malevolent beats.

Exterminata
This is dark and brooding, the ambient sounds and soft beautiful strings return the listener to realms within their boundaries accentuating harmony, although what is round the corner is predatory, intensive and compelling.

To Sum up:
There are quite a lot of surprises on this album that go from beauty to brutal and back again with a lot of gruesome parts in between.  Bristling with energy and voracity, let’s not forget that, but then like a soft caress throws you off guard.

The softer moments are indeed breath taking and simply cannot be ignored, obviously the music the band class as Brazilian, mixed together with the harsher, darker blackened death metal elements are something quite unique.

It gives the listener a respite from the totally brutal and gently pulls them down to less extremes, whilst still carrying that malicious side.  To look at the band you would think they wouldn’t know what gentle was but underneath all those studs, chains and maquillage or Corpse Paint as it is better known are three savage beasts who turn into angelic musicians when the mood takes. 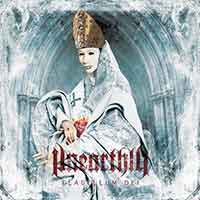