For those who like their black metal raw and old school without obliterating their ears, then Ungod's 'Cloaked In Eternal Darkness' is the right way to go. While much of it is pretty visceral black metal, overall the pace of the music is pretty decent so it doesn't feel like such a head rush. The production is gritty, but not faded so one can't hear anything. The guitars lead the charge with their sharp, buzzing riffs and the vocals snarl away in blasphemous fashion... Ungod have well been known for their blasphemous themes by collaborating with so many different other bands on splits and demos such as the likes of Cabal, Phallus Cunt, and Mort. This isn't for the faint of heart, but black metal rarely is. The album opens almost in a sort of 'Goatloard' Darkthrone era way- nice and slow, churning like the first hill of a roller coaster. The riffs just plod along in repetitive fashion and then the bass breaks in and saturates everything while the vocals grate away in their dark and evil sort of way; sadly, it is atypical black metal vocal use that brings a certain level of attention, and the band doesn't use it more often on the album.

Of course, don't expect anything like this through the rest of the album; it is a furious ride track after track from that point. Tracks like "In Eternity The Doomed Are Yelling" are a prime example of how Ungod's music usually sounds. The blastbeats are there and it is mostly a seamless see of noise, but it doesn't hit heard. Instead, consider one just treading water lightly as opposed to being tossed by waves or drowning, as some of the slower tracks can have that effect. "Morbid Predictions" is one of the faster tracks so the distortion can get a bit hazy, but the vocals stay on top of everything. Even though it is truly old school styled, fans might pass it off as the more generic of the music because it sounds so much like everything else that is out there. The solo- dark, twisted, and slower than the rest- is the only part that really stands out.

"Night Of The Forlorn Graves," brings the music back into slower territory, but it still isn't as slow as the first track. The guitars play a more active role in keeping the atmosphere dark and moody with a lumbering pace and the vocals snarling away, so again like a roller coaster, it is a great way to ease things down, and even throws out a last surprise. Rather than the typical snarl all the way through, the vocals near the end take on a clean chanting style that is still gritty and suits the tone of Ungod's themes perfectly in a dark, occult sort of way. It'd make quite the blackened doom metal track if it wasn't for the solo that just cuts in at the right moment before everything slowly fades out. Overall, this may be Ungod's only second full length album, but it's an excellent effort at trying to keep things in an old schoo, black metal fashion. 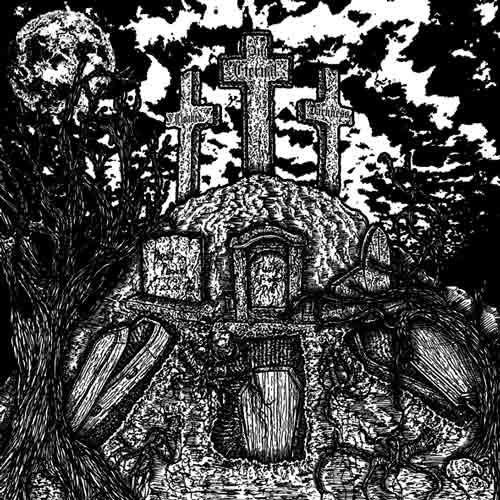