Unkind's unique grooves of hardcore punk combined with thrashing 'fuck off' rocking riffs are as elegant as a train wreck, in the sense that everything here is angry to extreme lengths. From vicious starting track, also the mini album's title, 'Pelon Juuret' - havoc is spread evenly throughout. In fact it's not until third track down 'Valtakunta', where some breed of melody is located, despite not lasting from its' small intro which swiftly evolves, blazing into the chaotic throaty, almost black metal screams of vocalists Tommi and Marko. The duel vocal approach isn't noticed easily between the two, as it becomes difficult to notice who is who.

Distorted guitars soon lead into 'Viallinen', a mostly instrumental corker from the record. Igniting the band's ability to complete a growing monstrosity of a song, with the help of the track's epic introduction which is sludgy and crusty to such an extent that makes you think twice about Unkind's genre altogether.  The band continue to impress with 'Laki', another top trump from the album, boasting of intelligent instrumental ideas where whirlwinds of hurtling riffs create an altogether dark, ambiance sound, topped off with the demented, spitting-like vocals.

As this mini album progresses, so does it's genre. If I'm honest this band does not deserve to be labelled with a bunch of fancy-core names and lumped in the lists of tons of other bands.  A record capable of such inspiring capability to achieve a healthy combination of structure, and intelligence belongs in a league of its' own, and if Unkind can pull of this achieving sound live then who knows what future lineups they'll be snapped up onto. Good things can only come from this unique brand of underground metal, yet only time will reveal. 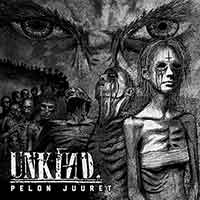