This is US death/thrash with more than a few nods to the early Florida scene. ‘A World At Dusk’ has a very tempting intro, before it goes a little augmented in chord structure and a little “clever/progressive” in terms of sound. Then picking up the pace, there are certain twists and turn that feel a little out of the box, but no so much as when the vocals come in. When the song maintains a more standard tempo with breakdown you hear some latter Death influences but you also have the zany world of bands like Coroner, but in the death metal spectrum very technical and nice to hear.

For a more standard musical prowess, head to the track ‘Twisted And Warped’ and when the vocal starts, I still can’t get over the vocal similarities to Chuck Schuldiner with the same raw energy of his bands early material. The guitar work for this 7 minute plus epic is really damn fine, this is the stuff I remember thinking as really ground breaking in the early 90’s. For the thrashier side I would take you to reference Pestillence, especially that heard on ‘Into Crumbling Ruin’. This is a real ride in cool old school metal but more than a tribute, it draws out influences and lays then down hard for your listening pleasure.

What a great start this release is, it makes me excited to think that there should be more to come from this band and a whole lot of reasons to pick this band up on a larger record label. Making more bones about the early 90’s Florida death metal scene than the rawer thrash scene at the same time, Unkured hit the ground running with a damn fine release peppered with all the hallmarks of past masters but arranged to make this more of their own release. 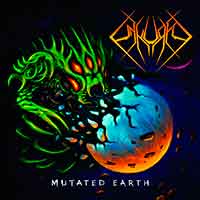