Unrest's debut, entitled "Grindcore",  is a direct shot to the gut in which the breath of competition becomes non-existant. Yet another fine release by Unspeakable Axe Records, this release will definitely have you thinking about the old days of this genre, but at the same time you'll be thinking of the sheer dominance that this same genre could have in the future. especially with albums like this. These guys take it back, yet move it forward with such energy not seen since the early days of Napalm Death and Repulsion. They have redefined grindcore music by refining the elements and fine tuning influences, and by doing so, they have given these younger generations the motivation and inspiration do dig into the history of this style of music; so that they can see how it has changed from its origins to what it is today. The band as well as the label should take ultimate pride in what they have accomplished with this release.

The basic roots of grindcore are ever present here, as well as the influences. You'll notice Repulsion, early Napalm Death, Misery, Unholy Grave, and  slight vibe of Agathocles in these tunes. But, what is interesting, are the riffs. Constructed and executed with the main theory of grindcore in mind, Unrest add a nice little twist in the form of that nice little "Swedish crunch" found in bands such as Entombed, Dismember, and Carnage. This just isn't the traditional sound for a grindcore riff, at least from my experience. This technique along puts this release on a whole other level. Such a great approach and very well done. If you can imagine what it would be like for, say, Entombed to play Napalm Death's "Scum" album, then you have the main idea of what's going on here. Awesome approach to the guitar work that makes this release a positive on every level. There is also a slight crust influence that summons up memories of the band Disrupt. This would mostly be in the vocal delivery. It's not really prevalent but it is indeed there. It sounds like a more modern mixture of the vocals from Repulsion "Horrified", Napalm Death "From Enslavement to Obliteration", and Terrorizer "World Downfall" with the Disrupt influence thrown in to be the icing on the cake. the only thing that I would say is 100% true to the old sound of grindcore is the bass and the drum work. In making this release, it seems the band laid down tradition in the form of the bass and drum tracks and built upon that to create this monster of a release with a sound that is all their own.

A damn fine job for a debut release. I am extremely impressed and look forward to what they have to offer in the future. If these guys keep it up like this, they are going to be around for a very long time. This is the first band that I have heard in this particular genre that seems to be all about the reservation of this art as well as its origins and history. Most bands just add influences and copy sounds almost as an afterthought. Unrest's music is almost, and could be thought of as, historical preservation. This album is going to get a lot of playing time in my stereo and has renewed my love for this type of music. Thank you, Unrest for creating what is sure to be a classic release that will stand the tests of time and critics from one end of this world to the other. Enjoy absolutely every bit of positivity and inspiration coming from this release. You guys have definitely earned it! 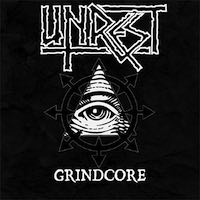