What you might expect to explode into Black Sabbath suddenly commences into a rioting experimentation of punk and heavy metal. Of course these genres are constantly spliced within the world of metal. Yet at the same time this does sound oddly unique. Repetitive down tuned riffs thunder back and fourth creating a strong backbone amongst the tracks - revealing their momentum epic build ups, as well as striking the listener with snarling, brutal vocals that are randomly spewed about as if nearly exploding themselves from the heart, to the throat, in an almost gurgled-coughing matter in which actually relieves the music from sounding just like any other band.

Despite the EP barely lasting fifteen minutes, each of the four tracks are smashing components to what I would accept as a decent upcoming metal band. The tracks do not appear similar to one another, but in fact separate themselves into their own odd categories and genres. The truth is, I really enjoyed Unsacred's 'Three Sisters' EP, to the point where I may look into buying a physical copy to add to my own collection. 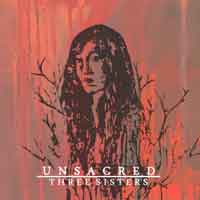