Unsu are part of the French grindcore scene and the band is created by some members of Trepan's Dead and Darkall Slaves. "The Filthy" is their second EP which contains five studio tracks and thirteen songs recorded live during the first edition of Lille Winterfest. The sonic devastation starts with "Napalm In The Morning" which isn't a cover of Sodom's track of the same name. No sir,this is low rumbling bass combined with samples from the cult movie "Apocalypse Now". This track also plays the role of an intro after which the aggression gets on the maximum level with "Magic Quartet Of Starfuckers". Unsu deliver furious energetic grindcore mixed with slower and heavier death metal passages. The drummer Gamin play with ease fast grinding swaths, punkish rhythms and double-bass drumming. The vocalist Micky alternates his voice from high demented screams to low grunts although the first type of voices is predominating. The sheer speed is characteristic for Unsu's music although the title track "The Filthy" is varied with one slow breakdown part. The final studio track is a cover of Nasum's "Time To Act" which is a logical step since Nasum, old Terrorizer, good old Napalm Death, Siege and other underground grindcore heroes are the main influence of Unsu. The live tracks' sound isn't the best possible so there is nothing much to be said about them. If you consider yourself grindcore fan you will surely enjoy this EP at least in its studio part. 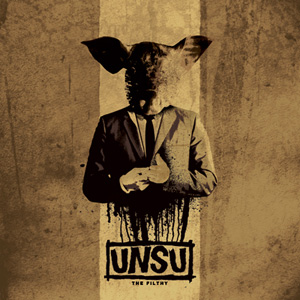