Until Death Overtakes Me - Days Without Hopes

Until Death Overtakes Me has always been intent on creating the most depressing, crushing funeral doom ever. Their last album as so crushing it was unbearable... in a good way. With their latest album, this Belgium madman Stjin van Cauter (who apparently heads numerous other funeral doom metal projects as well) seems to have finally softened up a bit. But, that doesn't mean he hasn't lost his touch in the 'depressing' department. If anything, his work has gotten more symphonic and more depressing.

In the pat, Until Death was too heavy. The reverbs and distortion overtook everything. Now, with Days Without Hope, Cauter does a good job of balancing the symphonic aspects of doom metal with the crushing part. The opening track is a pure epic, symphonic masterpiece and very pleasant to hear. This is, of course, a facade before the second track just comes steamrolling in and basically crushes all the hope any listener has for a happy ending (see, the album is already living up to its name). However, there's plenty of atmospheric breaks to feature piano and mournful guitar solos to give people breathers, but that's partly because this a slow suffocation of a good death. To create just a mountain of static through the guitars would turn too many people away. Instead, Cauter baits llisteners with these little interludes to make them think there's something a bit more to the music, and then envelopes them in crushing distortion again. However, once one looks back on these little bits they realize that the interludes are well orchestrated and much appreciated amongst the storm.

"Careless, Painless, Far Away" is a great mix of symphonic calmness and also crushing riffs. However, the symphonic elements outweigh the calm by far, especially with the keyboard, violin, and piano, while Cauter opts for a whispering vocal style that can barely be heard. Although it is a pain to try and hear him, the soothing atmosphere of the second half the track will probably make this one of the hits of the album. "This Dark Day" of course slides right back into the black hole of depression but there's more keyboard and piano scattered about. However, it is placed very well, optiong for a funeral atmosphere instead of symphonic one, which paints a very drab picture that suits Until Death overall. "Departure" seems to be part two of "Dark Day" as it carries on in the exact same tone with the exact same instrument placement. However, there is a calming reprise of "This Dark Day" that is pure keyboard and piano as opposed to crushing funeral doom, and it is a relieving outro that will leave Cauter with some very pleased fans to know that their listen wasn't an entire crushing waste.

For Until Death's standards, Days Without Hope opens new doors as it starts the band off in a new, more listenable direction, In the past, Cauter was dependent upon making the most depressing, crushing, lengthy tracks ever that really did a good job at making funeral doom metal sound good, but eventually it just got too repetitive and boring. Now, the music sounds exciting again. Plus, the orchestral arrangement is very well thought out, giving listeners breaks in between so they don't get overwhelmed, but at the same time don't get their spirits uplifted anytime soon either. A new masterpience in monumental doom metal! 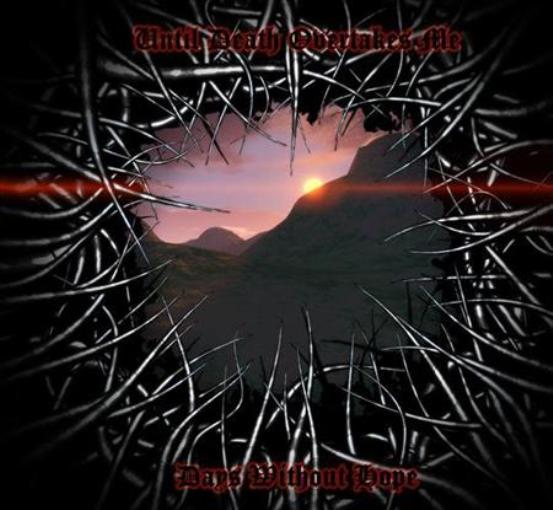