Upon Ruins - Legacy Of Desolation

Upon Ruins has broke ground with their first album “Legacy Of Desolation” which dropped in September of 2018. Hailing from the east coast of Canada, they consist of Howard Young, Shane Forsyth, Paul Shaw, and Greg ‘Gregadeth’ Thompson. Forming in 2014 but with no history of touring, playing concerts, or anything more than a 2016 demo, I think these guys have done pretty well.

Upon Ruins’ first album “Legacy Of Desolation” starts off with a triumphant intro in the form of 'The Oncoming Storm' which I think really sets the tone of the album. This album merges a nice mixture of melodic/power metal type guitars with some death metal-like vocals – it might sound weird, but once you hear it, it’s a pretty nice mix.

The album does have a few standout songs, 'The Endless Sands' is my personal favorite – it has some crunchy, ripping guitar playing. 'Forlorn Hope' is a beautiful reprieve in the middle of the album – it is soft, tranquil, and a great lead in to the gnarly 'Legacy Of Desolation'. Clocking in at 7½ minutes, 'Legacy Of Desolation' has gruff vocals, groovy guitar solos, and considering the circumstances, solid lyrics. No, they aren’t masters of double meaning like Behemoth and Nergal, they’re not artists of anger like Dying Fetus, or gods of gore like Cannibal Corpse, but for their first album, I think these guys did damn good.

The album also has a great one-off track 'The Winter War' that details the Finnish-Soviet war of 1939. I think it’s a great throwback to a hugely important part of history. In today’s shaky West-Russian relations, this song is not only ballsy, but catchy, to the point, and a highpoint in the album. It starts off seemingly mid-riff and doesn’t let up for one second – and with lyrics like “the red army torn/ divisions descend/ mass casualties” you can’t get any more brutal.

Overall, I give this album a solid 4/5 stars. It gets a little repetitive at parts; the riffs blend together a bit and drone you out of the action, but when it shines, it really shines. Its perfect listening for a train ride, short flight, or any other situation you can zone out of life and into the music. Its melodies meet the historical themes and death vocals for a great, relaxing, easy-listening experience. 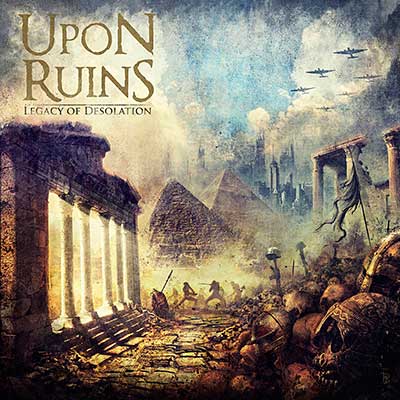