There are some bands out there not to be taken seriously. Germany's Urinal Tribunal are most definitely one of these. My first noticeable concept of this came from the album artwork of two women spreading the butt-cheeks of another person, and out coming lots of green fart fumes, engulfing half of the artwork. 2016's 'Flatulenz Korrespondenz' sets the band into territories of unique fun-core. A genre that is probably made up, but suits the band well.

Truthfully, the album covers aspects of grindcore, combined with elements of punk-rock. The silliness on top of this is 75% in the vocal department. Throughout the twenty-four tracks here, the majority are layered with odd vocal tones, sometimes these appear as childish especially when the sounds they make are that you would entertain a two-year old with. However, in the metal world - anything goes! And this immature stature the band present us with could be pulled off live if the pictures of them dressed up as unicorns and wearing pink tu-tus is anything to go by.

The entire album is practically full of surprises, from funky disco-trance pop, to snorting-pig vocals, to a guy humming loudly whilst having a shower...Yes, different is the word, but fun is the game here and that's the rules in accordance to Urinal Tribunal, so play loud (Not too loud you probably don't want your parents to hear this) and have a blast as I'm sure this band did whilst recording such a wacky release. 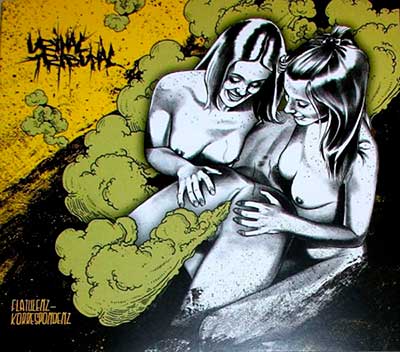