The name tells everything. Wherever you look, wherever you see, wherever you hear – piss above piss. I listen to this album and I’m pissed, I’m wet everywhere! Urinal Tribunal. Three fucking guys from nowhere in the near of Nürnberg (Germany – Bavaria or so) which apparently don't take themselves seriously and this is good. Otherwise now I would jump out of the window.

The title of the album "SchlüpferSchnüffler" what means someone who likes to smell old women’s underpants and at least you suspect now what Urinal Tribunal is. A fucking gore-grind-punk-band in tradition of bands like A.O.K., Sons Of Tarantula or Excrementory Grindfuckers. "SchlüpferSchnüffler" is the fourth release from Urinal Tribunal which is founded in 2005 and one thing is clear: Urinal Tribunal isn’t really new or progressive and there is no new idea but cool enough to have fun with them the entire album. 33 Minutes and 23 songs perversion and idiocy paired with shit that is simply fun and this should be.

So the first song "Humor Tumor" is the right entry to the album but ultimately it’s sad that there are no lyrics. Mostly only shreds of lyrics and sometimes I think, the band is happy to hear his own meaningless noise to fill the songs. Only the samples to the beginnings of the song are too few. There could be more fun if there were real funny lyrics. With lyrics to the songs I could say that Urinal Tribunal would be one of Germans best fun-gore-grind-punk-bands. You have to know that normally Germans have only bitterness. So if there is a funny band – this must be some of the best fun-band! Cause the rhythms are cool and some of them are real earwigs. The drumming is nice, the correct mix between grooves and fast parts. Only the bass is a little bit missed. The bass plays the same like the guitar, this is a little bit sad. If they would play a little bit more complex and different or if the bass would play sometimes together with the drum and not the same of the guitar – the album would be more interesting. Only in the songs "SchlüpferSchnüffler" and "OrgasmusSpasmus" you can hear a bass-part.

The sound is nice, to me a little bit too nice. The sound could have had a little more filth. I want to have more scum in the music. But otherwise the album is more a fun-record and may be this is the intension of this album. Anyways, to me the best song is the song "OrgasmusSpasmus" ‘cause there is everything a cool funny song must have. Hard guitars, great drums and some funny ideas. Overall this album is cool and funny but not suitable for MUCH-PLEASURE. Bands like A.O.K. are light-ways away. The album is cool enough to have fun with for a short while but not more. Cool and funny enough for one or two concerts but not more. You can buy this record if you are an obsessed collector of funny shit records. All the others I would tell to better go to some of "Urinal Tribunal" concerts. It's better than buying a record only for the cellar of history. 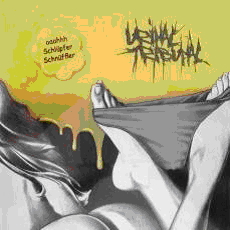