When the heck was this EP released, in the late 80s? That was my first reaction on hearing this follow-up from these Polish youngsters who return after a 2 year absence since their debut. Not that I am saying this in any negative way, but on the contrary, as the sound bears a signature tone that neither bands like VENOM on their latest releases have managed to bring back. In fact, although Polish, this act reeks of British undertones, from the SABBATesque resonance of their riffs to the London’s South Bank precinct Shakespearian flair of their intros. Hell, even their bio is divided into Act I, II et al., an entertaining farrago when one remarks that after III comes IV not V…. just check out their site to catch and share my drift!!!

Yet further into the music, the guitars echo such a healthy dose of thrashing memoirs, that once so magically intertwined with the haunting keys and raucous vocals, form the palette that is UZIEL as one solid piece of witching viciousness. Besides, since their An Empty Shell entree, the Poles even dug up their holes and replaced their drum machine with a real live drummer. Yet this is sadly their flaw - as drum tracks come about as a crossbreed of a drummer observing non-drummer ideas and a die-hard old-schooler who refuses to experiment. In fact, whether or not this was intentional of UZIEL to sustain their 80s sound, it still sounds so mechanical & repetitive, that in this case I have heard zillions of better examples.

Not to forget that the ghost of a drum machine is so clearly audible in the ride cymbal department that it hints at some machine track later kept in the mix. In short, a studio trick that fails with experienced listeners who know that peaches grow on trees, yet is not such a hodgepodge if one concentrates on the music in its entirety.

Notwithstanding, if the word UZIEL results from combining two Hebrew words to mean that “God is my strength”, I would for one wait till God takes off his sandals and Satan puts on his boots. Meanwhile, Long Perished Rebels is sufficiently a good release to keep me interested. 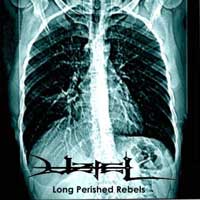 1. Killed And Rotten
2. Death By Burning
3. Weak
4. Forever With You
5. Falling (In Love With A Piece Of Smoked Park)

Self released
Reviewer: necrogool
Feb 26, 2009
Next review: Utuk Xul - The Goat Of The Black Possession