This is the first release of the Lusitanian Metal Classix Series brought to you in conjunction with two Portuguese record labels that features unknown Portuguese metal bands brought back to life from the 80’s. Last month we covered a band called Valium, this time we have V12.

Formed in 1984, this release is split into two cd’s. The first CD, which has the more metal tracks on it I have to say and features Raf Maya on vocals and covers their first demo, live tracks from ’88 and a rehearsal tape from ’87. When I say this is more of the metal, it is, but you are really going to have to have patience with some of the vocals though. A few of the high notes are about two octaves out of range, there are a few eye squinting moments, but in the spirit of the songs it works, don’t say you have not been warned! ‘Born to Die’ is a perfect example, but the music is stellar. If you like US power metal then you will find favour here, even some early Manowar is relevant by comparison too. Overall it is of a demo quality recording so don’t expect miracles. The live material on disc one is actually really good quality and such makes tracks like ‘Comandos’ sound great. ‘The Exorcism’ and ‘Hot and Sweet’ are two other tracks making its mark on my ears from the wealth of material that is on offer over these two discs. This is cool stuff, you do here this material as if it was at the recording material

Moving onto disc two which features vocalist Jorge Martins and is a full live show from 1990 and in their native language. Overall, the songs on this disc and from this era sound a little lighter than the more metallic disc one. However, there a still rather good highlights to pick out like ‘Claustrofobia’ and ‘Exorcismo’. Make no mistake, this is still cool but as with most people and singers, they have a favourite and this disc shows a different character and stance to V12’s music. Oh yeah, and you have the guitar and drum solos in full! The diehard version of this release has a DVD, which going with the music on the live disc two, will be a special experience.

I thought pre-internet age and growing up that I heard a lot of these underground bands, but when gems like this surface, it takes me back to my younger days. The hunger for searching out new real metal bands is a passion, this release is a passion by the labels involved who were fans of this band too. As a package, this is an awesome two disc set, essential to purchase for US metal fans, albeit from what is now Europe. Sit back, rejoice and relive this material, it’s great that labels are releasing this material and I look forward to a few more of these underground releases surfacing in a near future. 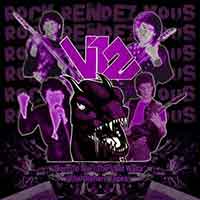